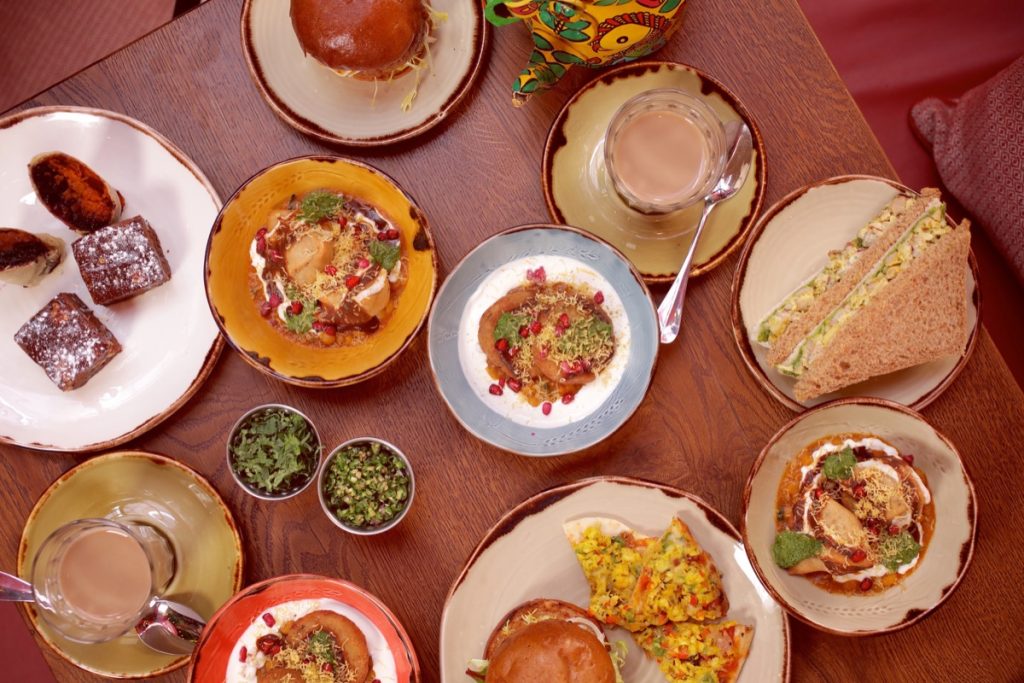 Vivek Singh’s delightful Cinnamon Bazaar on Covent Garden’s Maiden Lane, which we reviewed earlier this year (read here) has laid on a new treat for its visitors. When I last visited, at evening time, the restaurant was buzzing – true to form to its bazaar concept. Diners occupying all the tables and the plethora of colour that filled the interior was accompanied by the smells and noise of a true Indian restaurant. The setting for the cuisine had definitely been set. Yet this time my visit was distinctly different. For one it was a Saturday afternoon, one where in Covent Garden the diners and patrons of the area switch predominantly from Londoners to tourists. The restaurant was certainly much quieter, only a few tables in at this hour. Yet this instantly allowed me to fully appreciate the internal space, that I had not quite done before due to commotion. 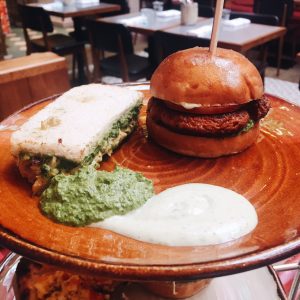 Delivered to our table initially was some still water and two Cinnamon Bellinis. A delicious treat after a morning and lunchtime of shopping and visiting museums! We took our time sipping and chatting, generally enjoying the laziness and relaxed nature of it all – as it quite rightly should be. Afternoon tea was never a pastime that should be rushed. The sandwiches were first to arrive, brought over by the waitress on a delicate tiered steel stand. Tandoori chicken and chutney, and, Bhangra lamb sliders served alongside our teas of choice – an Indian Masala Chai and an Earl Grey. Both delicious with huge flavour coming from the Indian spices. Particularly interesting was it being served as a sandwich, something not typically seen in Indian cuisine. The second course was our favourite. An Aloo Tikka Chat which is a spiced potato cake with curried white peas and chickpea sev. Literally bursting with flavour. There was also a Samosa Chaat – equally delicious, with Punjabi vegetables, and a tamarind chutney. At this point we had forgotten that the restaurant was empty as we were so into what was in front of us on our plates. Cinnamon Bazaar also offers guests the opportunity to choose chaats from the Chaat Cart. There’s a range of cold chaats such as watermelon or Dahi Baahl chaat and these can be accompanied alongside hot chaats from the kitchen. Individually for reasonable prices of around £5. All the dishes draw inspiration from the restaurants concept of fusion cooking in a bazaar, where for centuries ingredients and unique cooking concepts have been exchanged and adapted. The restaurant’s style also reflects this unique marketplace with a laid back and relaxed feel to it where the focus is very much social food where conversations with friends must be had.

There wasn’t much room left after all of this deliciousness, however we were tempted to squeeze in carrot halwa roll and dark chocolate and walnut cake. 4 segments arrived on a plate with a delicious sweet caramel poured over and pooling on the plate. What a way to finish. We might have to come back for dinner to have this one again! 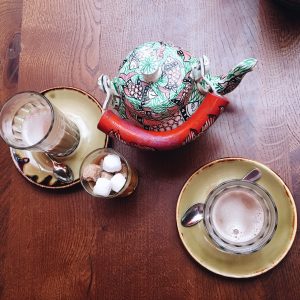 Afternoon tea is of course a famous pastime of the British and something that when visiting London one must try. However why not try a different take on the scones and visit Cinnamon Bazaar for Vivek Singh’s truly unique and delicious Trader’s Tea. We’re pretty sure that you won’t be disappointed.

high tea is priced at £30 for two people or £40 with two glasses of sparkling Cinnamon Bellini.

Read Hero and Leander’s other visit for dinner at Cinnamon Bazaar here. 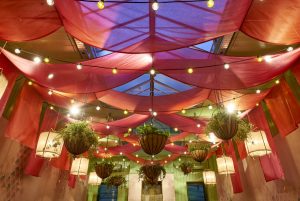