A delicious Indian curry is as ingrained in British culture as a bag of fish and chips. Here at Hero & Leander we are always craving Britain’s favourite takeaway and can often be found discussing our hankering for curry. As lovely as it is to order a plethora of Indian dishes from your local takeaway for a stay at home date night, it doesn’t match the scrumptiousness, skill and romance that comes with dining in some of the finest Indian restaurants around. Complete with Michelin stars and awards galore, we have compiled a list of our favourite Indian fine dining establishments, perfect for celebrating an occasion, or just to pull out all the stops to impress on date night. 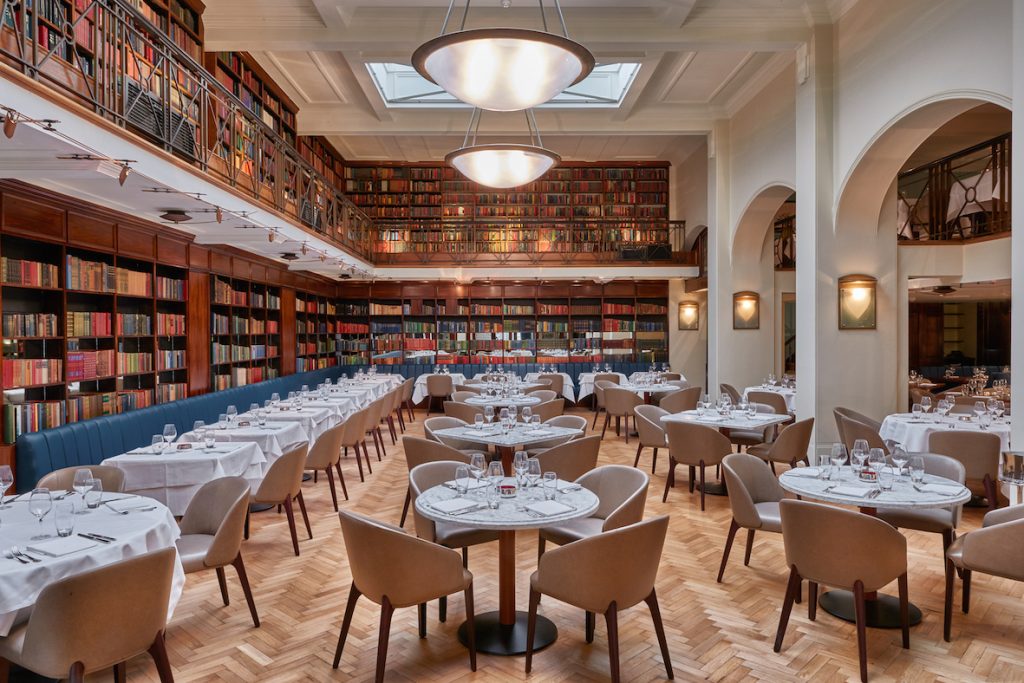 Having celebrated its 15th anniversary back in March of this year, The Cinnamon Club is one of our ‘must visit’ restaurants. Magnificently majestic and exceptionally modern, it honours the best of contemporary Indian cooking. Set within the grand Grade II-listed Old Westminster Library, The Cinnamon Club’s book-lined shelves and traditional features were updated and elevated back in March with dashes of colour and contemporary furnishings. Vivek Singh and Head Chef Rakesh Ravindran Nair developed a stunning new menu that combined The Cinnamon Club’s signatures with new dishes and celebratory platters. A roaming gin trolley offers cocktails to clink from lunch through to supper (we love this!). Adding to the restaurant’s convivial atmosphere, Vivek and Rakesh introduced celebratory sharing dishes; a concept that we love here at Hero & Leander. Carved and served tableside for between two and eight guests, the sharing platters are perfect for special celebrations and lingering suppers. Dishes include exclusive ingredients to The Cinnamon Club such as the very special milk-fed Herdwick lamb, a slowly braised shoulder of highly sought-after lamb from the Lake District, served with saffron sauce, pomegranate pilau, burhani raita and, coriander chutney. A three-course set feast for tables, of four or more includes dishes of Kerala spiced seafood bisque, flamed with brandy; banana chilli with fenugreek, raisin and bitter gourd in chickpea batter and dessert of spiced banana tarte tatin with thandai ice-cream.With a deluge of awards to their name, dishes that melt in mouth and flavours to make your tongue sing it is not surprise that the popularity of The Cinnamon Club is constantly evolving. 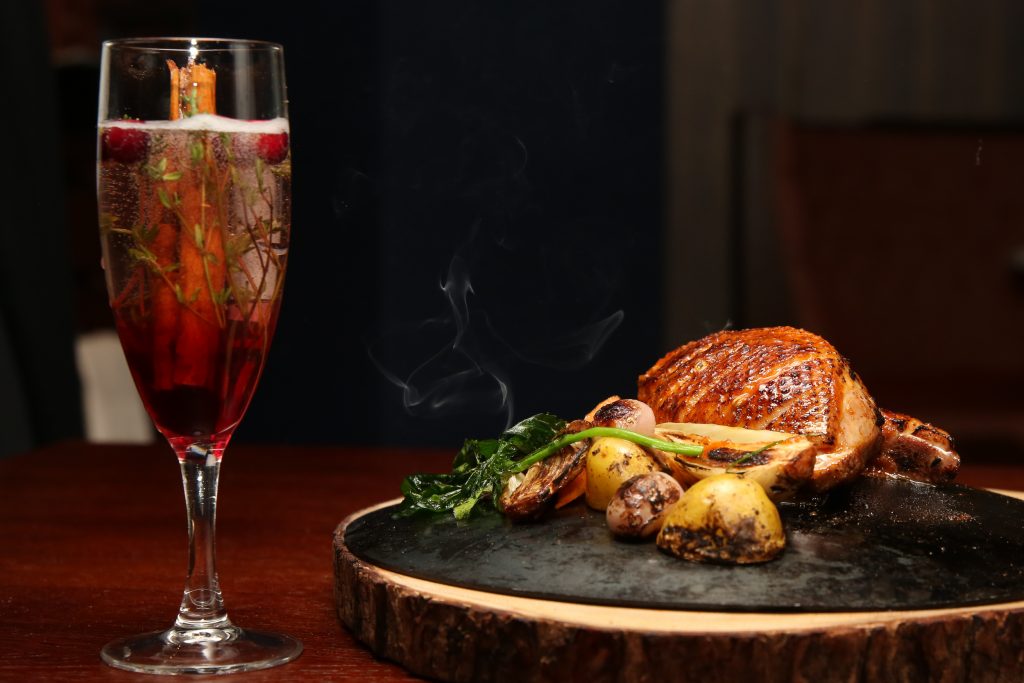 The Head chef behind the renowned and previously mentioned Cinnamon Club, Abdul Yaseen, has launched his latest venture Darbaar earlier this year. This expansive 220 cover restaurant in Shoreditch features an open kitchen with counter seating, a wood fired oven (for the artisan bread, Nanza), a charcoal Robata grill, 20 cover private dining area and a 12 cover Chef’s Table. Darbaar’s menu and interiors are inspired by the banquets of the Royal Courts of India, with midnight blue walls, gold chandeliers, copper tones and elephant heads adorning the walls. Arriving in Britain 15 years ago from Jaipur, Abdul is well known for being a dynamic, creative and innovative Indian chef; his style a combination of the highlights of the East and best of the West. As his patrons of the Cinnamon club will be aware, he pushes boundaries, experimenting with different flavours and reinterpreting staple traditional dishes. Abdul won the British BBQ championships and the Canapé Cup at Square Meal Venues and Events three years in a row, and regularly features on ITV and BBC2. The mouth-watering menu at Darbaar features an array of healthy grills, street tapas dishes, spit roasts, and sharing dishes. Nawabi Slow Roasted Leg of Lamb, Keralan Shrimp Cocktail, and Kid Goat Biryani feature. In true modern Maharaja style, a dish called “The Royal Pot”, popularly known as Shahi Degh, is served in an earthenware pot and inspired by the feasting dishes straight from the royal court. For dessert – halwa spiced carrot cake with lemon figs, or a lemon and stem ginger brulee with rhubarb compote. Darbaar also features a comprehensive wine list for all tastes and budgets. 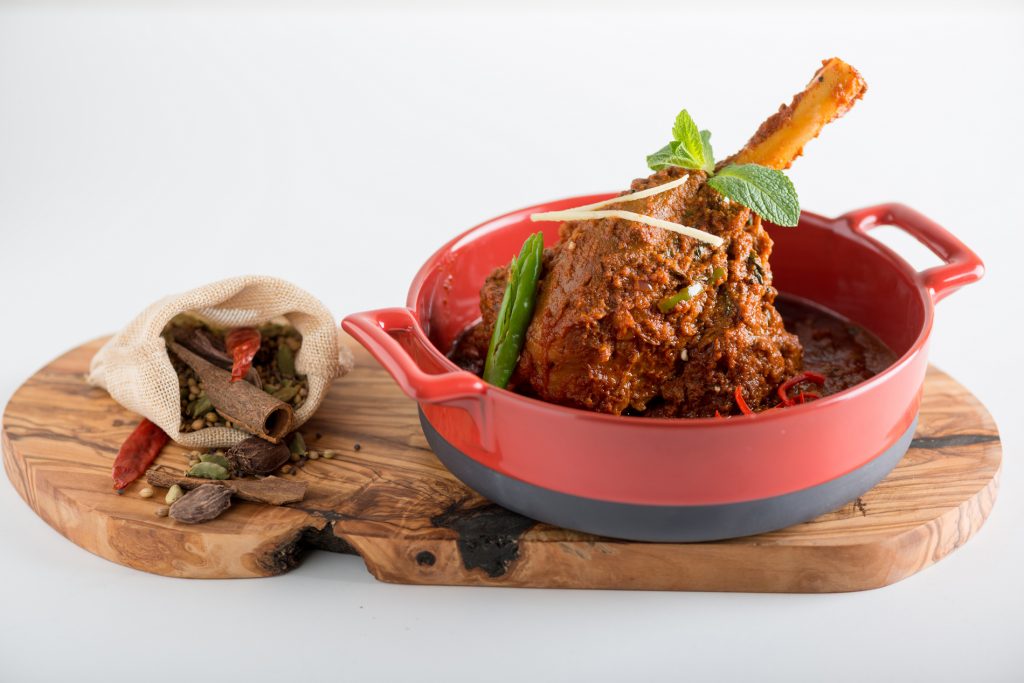 As England was gripped with football fever back in 1966, Gaylord Restaurant was just making its mark on the London dining scene. This year, Gaylord Restaurant celebrates 50 years as the benchmark in Indian food in the Capital and is delighted to still be welcoming a new generation of fans – no mean feat in an industry where restaurants come and go, and food fads change at an alarmingly fast pace. Gaylord Restaurant prides itself on serving the finest Northern Indian cuisine and over the years it has been a top destination for celebrity clients including George Harrison & Ringo Starr, Peter Sellers, Rex Harrison, Faye Dunaway and Ben Elton.

The first ever Tandoor charcoal clay oven was lit in Gaylord’s kitchen and because the owners were so concerned that it should arrive safely when flown from India, it was given its own seatbelt on the aircraft!  The same oven is still used today, 50 years on, as Gaylord stays true to their philosophy ‘Tradition is always in’, embracing Western elegance and innovative presentation whilst celebrating India’s best culinary classics, effortlessly combining old and new.

An anniversary isn’t the same without a party, which is why Gaylord is hosting an exclusive party this June to mark the 50th Anniversary.  A lucky customer is in with a chance of winning two tickets to this prolific evening event on Sunday 19th June.  Expect a true Indian extravaganza, with street food, vibrant cocktails and exciting entertainment.

To enter, all customers need to do is simply dine at the restaurant in London before 10th June when entries will be put into a ballot. The winner will then be selected at random and announced on 13th June on Gaylord’s Twitter and website. 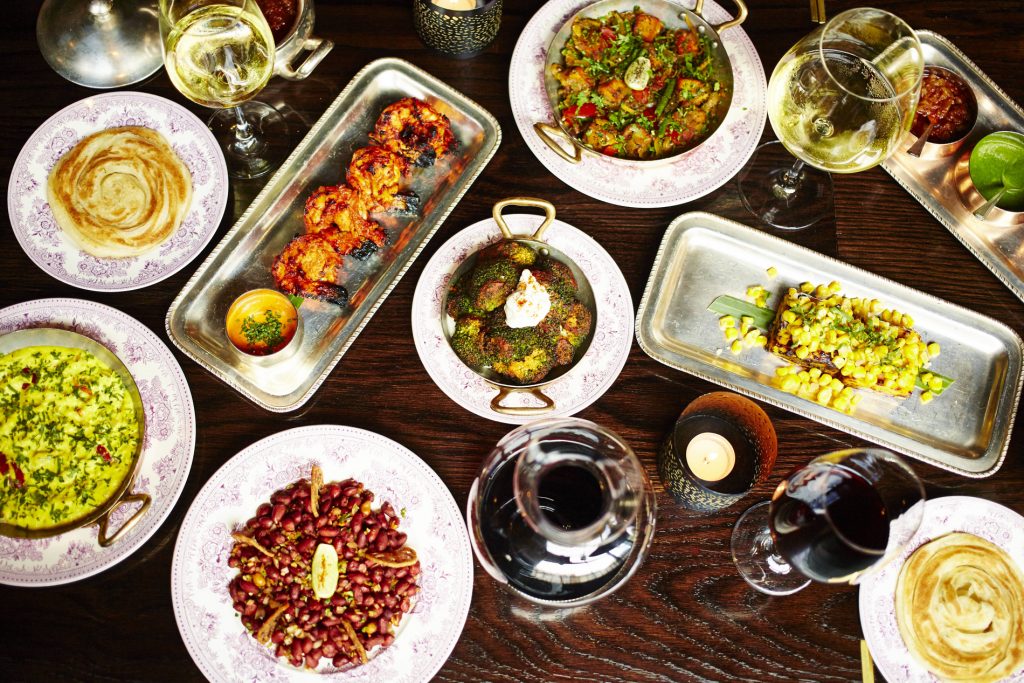 Gymkhana is inspired by Colonial Indian gymkhana clubs, where members of high society socialise, dine, drink and play sport. Gymkhana has retained a Michelin star since 2014 and became the first Indian restaurant to win the BMW Square Meal Restaurant of the Year award in 2014. The restaurant was named the ‘UK’s Best Restaurant’ 2014 and the ‘UK’s Best Indian Restaurant’ 2015 at the National Restaurant Awards. Literally voted as ‘The UK’s Best Indian Restaurant’, Gymkhana, has a new series of unique spirit-led dinners in collaboration with a line-up of some of today’s most exciting independent distilleries and spirit brands who have been challenged to create a bespoke drinks list to enjoy with the restaurant’s Michelin-starred Indian menu. The events will be held in Gymkhana’s private dining vaults, secluded on either side of restaurant’s lower ground floor. The first 2 events in the series have passed but book now onto Gymkhana X Ceylon Arrack: Directly from Sri Lanka, Rockland Distilleries’ arrack expert will introduce guests to Ceylon Arrack, South Asia’s handmade spirit. Produced by a local family distillery since 1924 and developed by four generations of the same family, Ceylon Arrack is relatively unknown in the UK.  Guests will discover how the arrack is made and learn more about why it’s becoming so popular. The evening will include a five course Gymkhana Menu with cocktails and tastings at £120 per person. 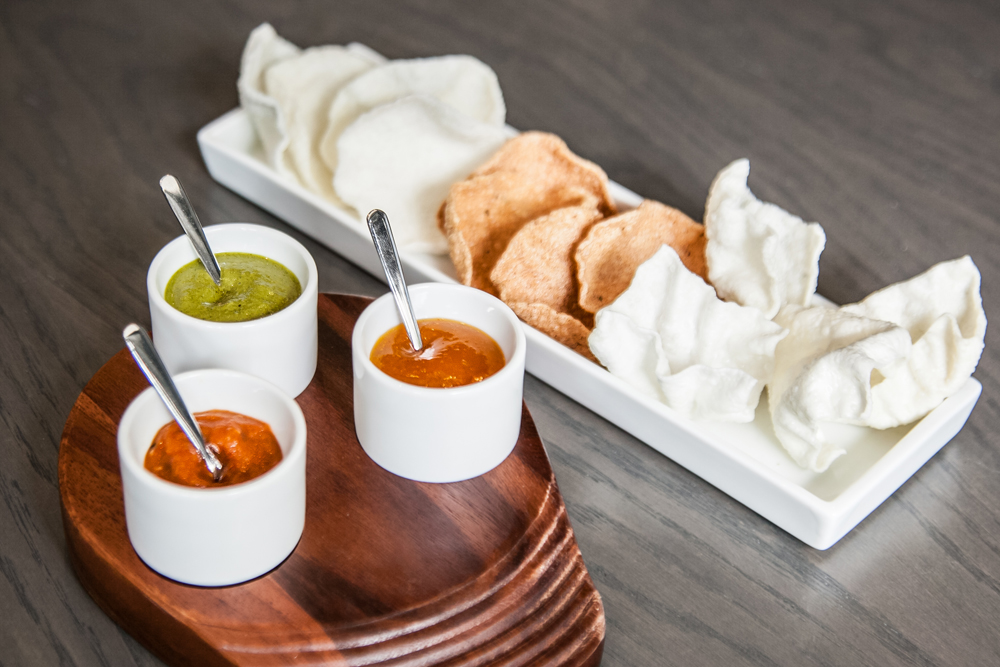 If you have never been to Lotus then now is about time that you started planning a trip. They endeavour to create an epicurean traditional Indian gourmet experience which elevates the emotional and physical well-being of guests. Yes, that may sound a little confusing but ultimately it is all about fantastic food. A 65 seat contemporary restaurant in the heart of the West End, Lotus is named after the national flower of India which signifies purity, spiritual awakening and grace. Their team of chefs have worked in the finest luxury hotels in India and trained by the grand master chef of Indian cuisine. Menu highlights include Red Snapper with mustard essence , crisp Bengal Gram and dill yoghurt, or Roe deer biryani with the finest basmati, herbs, spices cooked on simmering heat, served covered with pastry lid (serves 2). 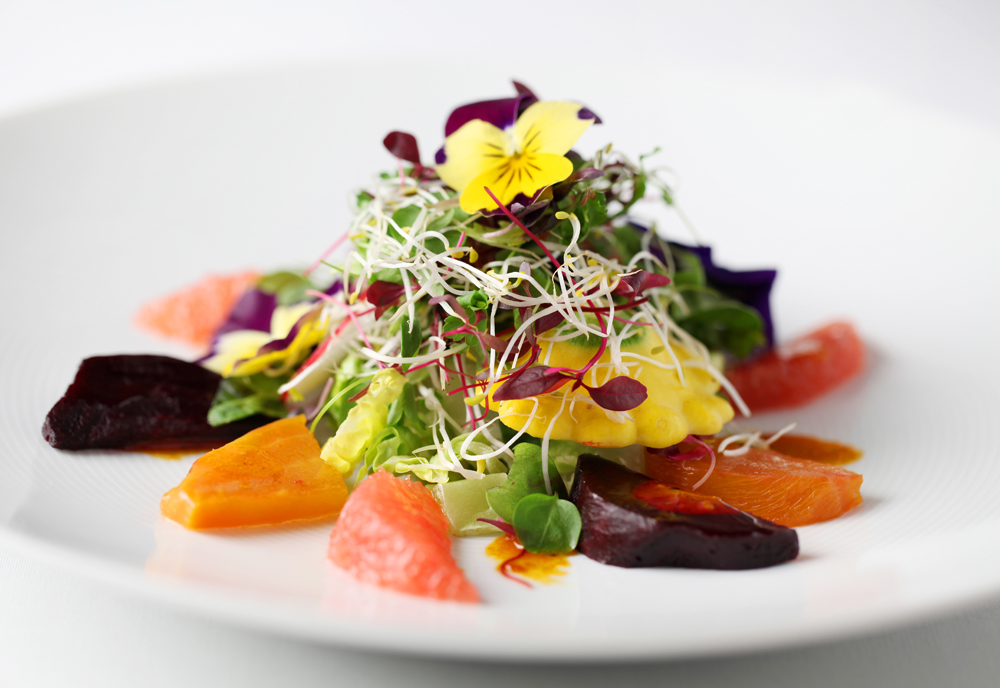 The signature Michelin-star Indian South West Coastal restaurant Quilon is housed in the Victorian townhouses that comprise Taj 51 Buckingham Gate Suites and Residences and St. James’ Court, A Taj Hotel, minutes away from Buckingham Palace and The Houses of Parliament. With its beautifully understated interior and peaceful ambience, Quilon is an oasis of calm and tranquillity. Chef Sriram Aylur is passionate about the philosophy behind Quilon – a passion for progressive Indian South West coastal cuisine, a dedication to the freshest ingredients and a playful desire to blend traditional home-cooking with modern dishes for a thrilling and unique dining experience. Quilon imports more fresh Indian spices than any other Indian restaurant in Britain and grinds and mixes them carefully to create special recipes. The goal of creating contemporary Indian South West Coastal fare, without compromising the soul of the cuisine has been achieved through a genuine love of food and a real understanding of the cultural and ethnic diversity of the region. At Quilon, contemporary healthy dishes are created with flair, style and a deep respect for authenticity. Seafood is, of course, central, with specialities including Seafood Moilee – cubes of halibut, tiger prawns and cubes of potato gently poached in a moilee sauce, Lobster with butter pepper and whole pan fried Sea-Bass. Traditional fare like Chicken Roast and Malabar Lamb Biryani sit happily alongside more progressive dishes such as Pan Fried Duck Breast and Venison Coconut Fry. 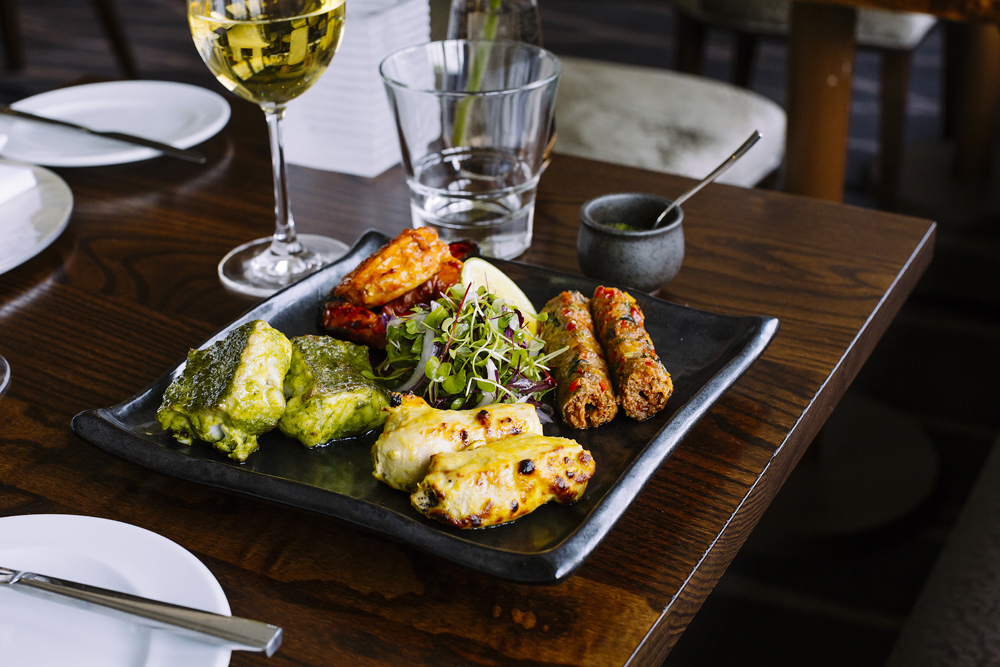 Sindhu by Atul Kochhar presents a sophisticated menu designed to celebrate the very best of cuisine from the south west coast of India in a contemporary manner. An idyllic setting in a beautiful hotel on the picturesque banks of the River Thames. In Sindhu (which means river or ocean, appropriately enough), Atul has cooked up another sure-fire recipe for success. The menus are inspired by Atul’s love of the south west coast of India and its unique culinary traditions combined with his love of using the finest British ingredients. The result is an innovative style of authentic modern Indian cuisine. So you’ll find deliciously distinctive creations such as Hiran ka Boti (venison saddle with cardamom and mace), Meen Moilee (wild sea bass with coconut moilee sauce) and Bathak Falliyan (Gressingham duck breast with three bean stew and coriander cress) to name but a few. For those struggling to make a decision among all the tempting options, the tasting menu offers a delicious solution, featuring a specially chosen selection of appetisers, mains, sides and dessert. The most carefully selected ingredients, the subtlest of spicing, the most exciting flavour combinations… every dish has been designed with more than a dash of that legendary Kochhar magic. 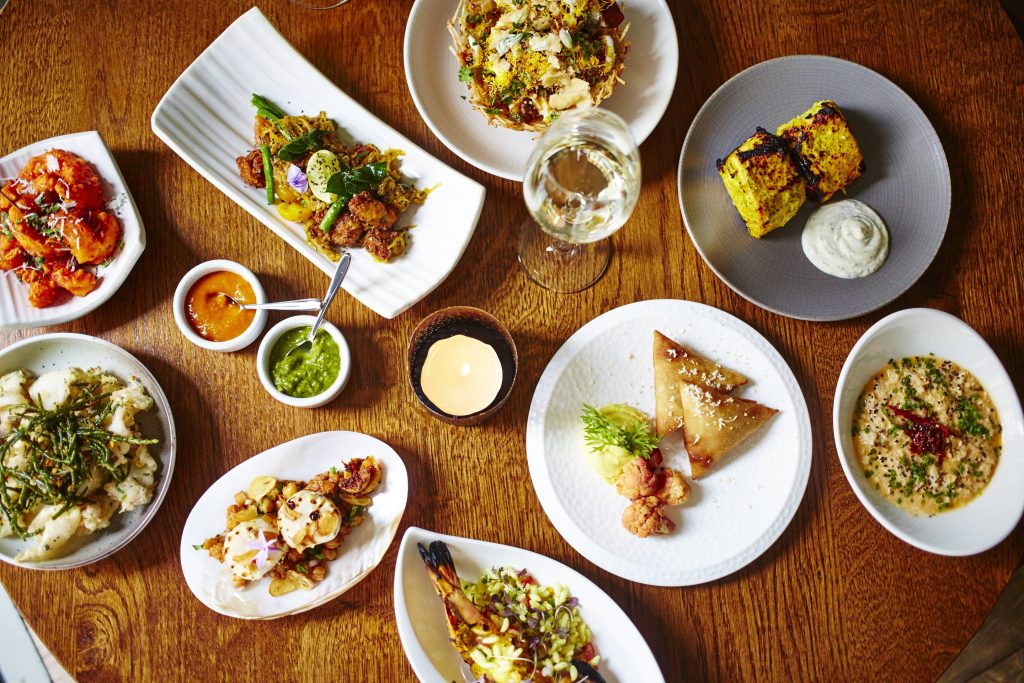 Located at 15-17 Blandford Street, in the heart of Marylebone Village, Trishna specialises in the coastal cuisine of south-west India. The restaurant was opened in 2008 and was awarded its first Michelin star in the 2013 Michelin Guide, having previously been awarded a Michelin Bib Gourmand. At the beginning of the year Trishna announced 2016’s Not Your Average Curry Night series, back with a new spin for guests to discover regionally inspired, Michelin-starred Indian cooking, along with expertly matched Champagnes, wines and sherries. The Sethi siblings’ acclaimed Marylebone Village restaurant originally began hosting special wine pairing evenings to take the notion of a ‘curry night’ up a gear – expressing a sense of occasion and community, but with dishes that were elegant, deftly spiced and perfectly complemented by fantastic pairings selected by co-founder and sommelier Sunaina Sethi. This year, the series will take guests on a culinary tour of India’s regions, with each event focusing on the signature flavours and ingredients of a different city. May will delve into Goa’s rich and varied seafood and vegetable dishes and in September there’ll be a riot of puris, bhajis, bhels and idlis from Bombay. Surrounded by splashes of colour from vintage Air India illustrations, brass pendant lighting and reclaimed wooden panelling, the events will be held in Trishna’s dining room. Each Not Your Average Curry Night will feature a five course menu from Executive Head Chef, Rohit Ghai, and a different pairing chosen by Sunaina to showcase the range of wines that Indian food can be paired with, priced at £120 per person.

Tuesday 10th May – NYACN: A Taste of Goa