For many city dwelling couples, a night away in the countryside can be just what the doctor ordered. Peaceful surroundings, romantic county walks, hearty food and a good dose of R&R.  So when we were offered the opportunity to stay at Hampton Manor for a night we jumped at the chance.

Hampton Manor is a convenient 3 hour drive from London into the picturesque West Midlands. Classed as a ‘restaurant with rooms’ we were initially a little confused about the title as we had never encountered one on such a large scale, or in such an impressive building. But as we came to learn, Peels newly Michelin awarded Restaurant is the main event. 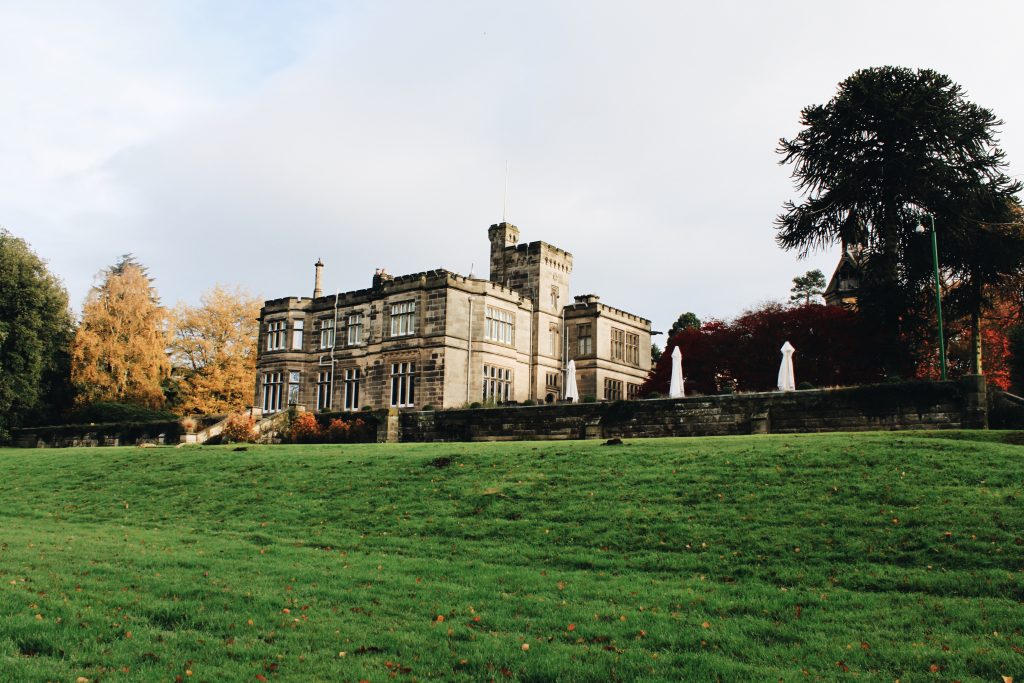 Steeped in history, this 19th century building has housed many notable characters including one of its most famous residents and former Prime Minister, Sir Robert Peel. Today three generations of the Hill family are shaping this estate’s future and propelling it into the modern day whilst still paying homage to the buildings history. For us here at Hero & Leander, staying in a family run establishment always seems particularly special and adds to the charm of the place. Perhaps it’s because it is a one of a kind property or perhaps we are just old romantics and love the sentiment behind a family run business. Either way, we were thrilled to be staying. 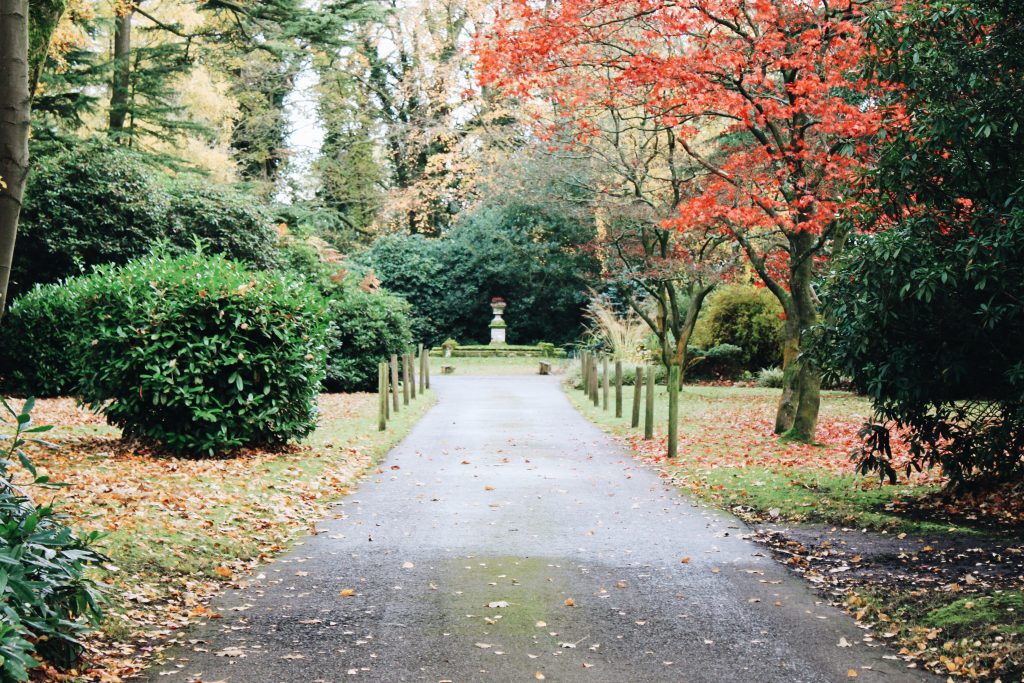 As we pulled up into the driveway, Hunter wellies and Barbour Jackets on, we were taken aback by the magnificence of the building and having already researched its history we were brimming with anticipation to see inside. Walking into the main lobby was a shock. It was toasty, modern, design-led as well as incredibly light and airy; a complete contrast to the dark imposing exterior. The lobby’s look is completed with velvet, oak-framed sofas and mid-century rocking chairs that provide a cosy retreat in the reading corner. We were told that the colour palette was inspired by the original Minton tiles that line the entrance halls: indigo with accents of burnt orange, red, and ochre and walls are completed with William Morris Standen print wallpaper from Morris & Co.

We were greeted by the front desk and told that our room wasn’t quite ready yet so we took the opportunity to explore the grounds before we settled in for the day. Autumn was the perfect time of year to visit. The leaves were crisp, the sun was out and the trees were painted in fiery tones of oranges, yellows and reds. We explored the walled gardens and with each step we were taken back in time to when Queen Victoria was monarch. The peace and quiet was a welcome change from the cacophony of the city. It was pretty chilly out and as the tips of our fingers began to go numb we thought it was best to head back inside to thaw out. 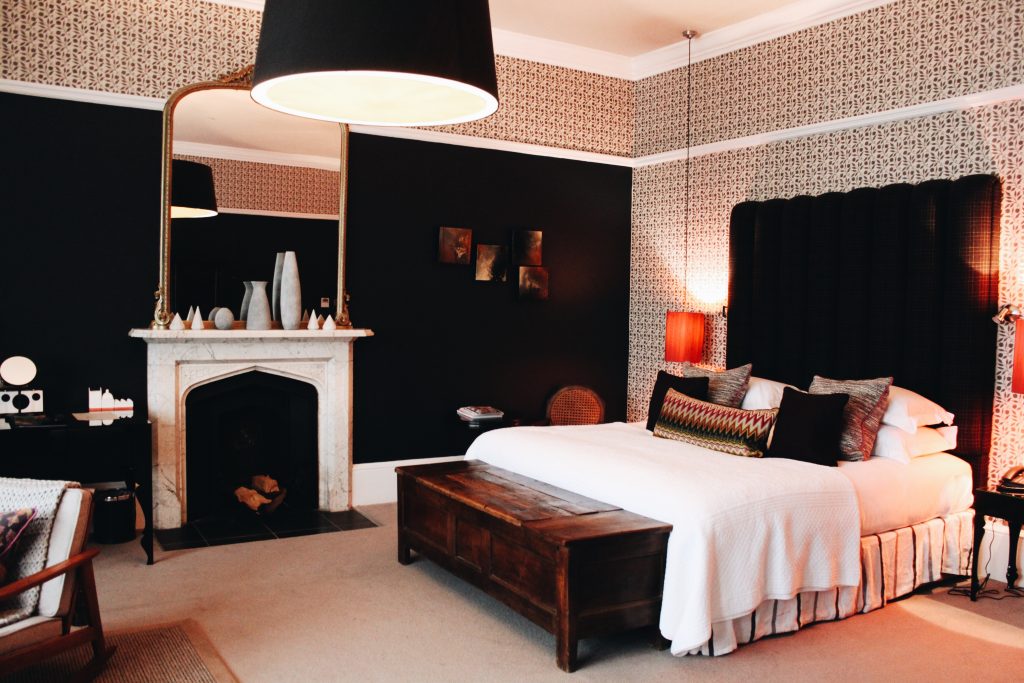 With fingers and toes back to normal temperature we were informed that our room was ready. Hampton Manor has eight signature guestrooms and suites that have been redecorated in the recent refurb and all are individually designed. Referencing the Arts and Crafts movement with William Morris wallpapers and fabrics, each room is finished with innovative touches, like ladder bookshelves and commissioned furnishings and accessories from handpicked artists and makers. We were fortunate enough to be staying in the George Fentham suite, one of only two suites in the property, the other being the Robert Peel. It was unbelievably spacious and cosy beyond belief. As the weather started turning grey our suite was the perfect snuggly hideaway. The bed was huge. So huge in fact that when I rolled over into the middle I would have expected to have touched my partner but they were unreachable. The pièce de résistance of the room had to be the large bay windows looking out onto the beautiful gardens. Yet it’s still the little things that make this house a home; fresh coffee to grind, bluetooth audio system, a record player, home-baked cookies, and natural botanical toiletries from 100 Acres. We loved that each of the rooms were named after someone who once owned the estate, from Queens to musicians. 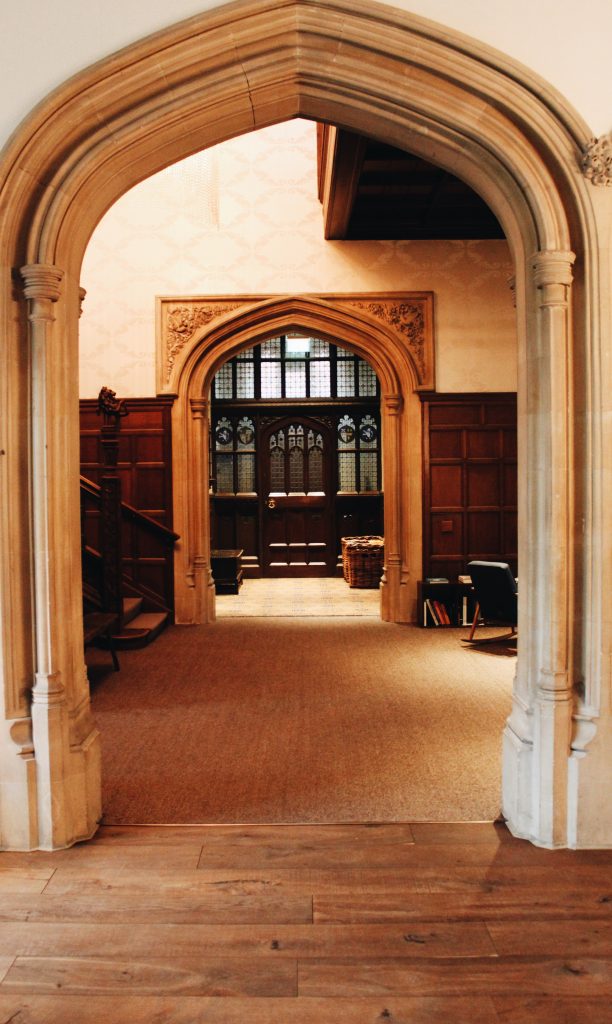 Amazingly Hampton Manor only launched in 2008 and since, has won a pride of awards. But let’s not forget that this is a ‘restaurant with rooms’ so food is the focus, which is fine by us. Peel’s Restaurant, a peerless dining destination, won its first Michelin Star in October 2016, which put the Manor on the map of Britain’s leading culinary hotels. Marrying historic and contemporary elements, Hampton Manor’s re-launch as a restaurant with rooms reflects its foodie-focus and ethos: to create spaces where guests can gather together and make memories. The reimagined interiors have created a home-from-home country retreat, asking guests to make the Manor their own. And what better place to make lasting memories than around the dinner table? 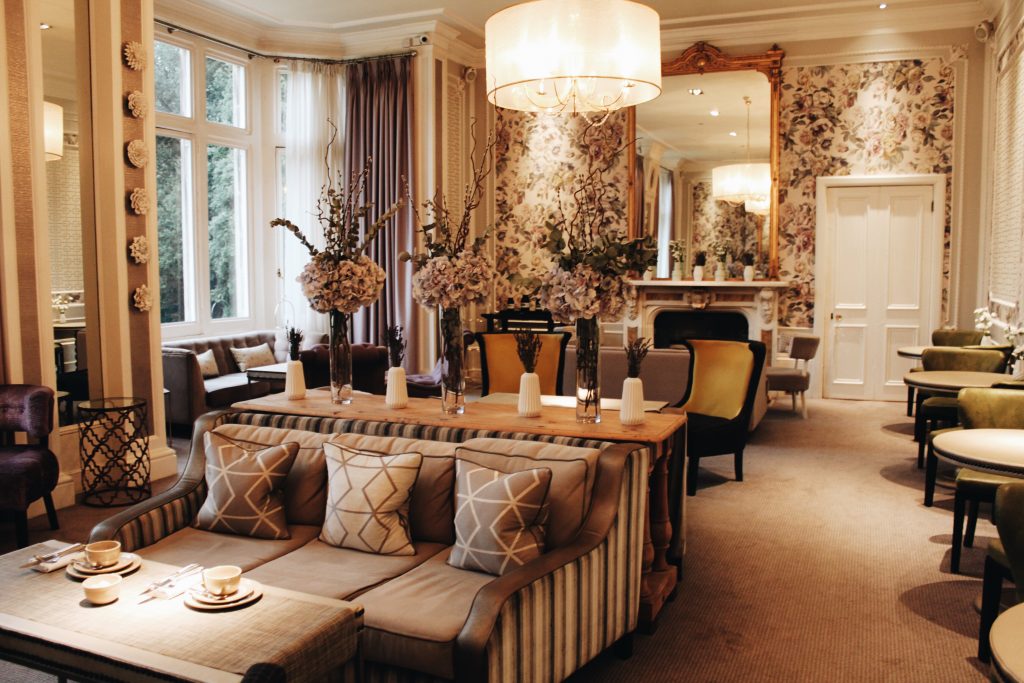 After luxuriating in our room for a few hours we smartened up and headed downstairs for dinner. To start we were led in The Parlour, a breathtakingly beautiful room with high ceilings and a warm romantic ambience. We late learnt that they serve afternoon tea in this room and we couldn’t think of a more perfect setting. However for this particular evening we were not there for afternoon tea. We were there for the cocktails! Taking a seat by the crackling log fire we explored the extensive drinks menu before deciding on the Acid Plum (Hendricks gin, acid plum, umeshu and egg white) and the Clementine Collins (Chase extra dry gin, clementine, Assam, cinnamon, lemon and soda). With the drinks going down a treat our really polite waiter presented us with a small plate of nibbles. Salt fermented beetroot. We had never had beetroot prepared in this way but we were pleasantly surprised by the flavour. They were moreish morsels and before we knew it we had polished off the plate. To follow we were served a delicious selection of canapés all presented appealingly on a rustic granite slab. With one of us being a vegetarian we really did get to see the kitchens creativity at its finest. 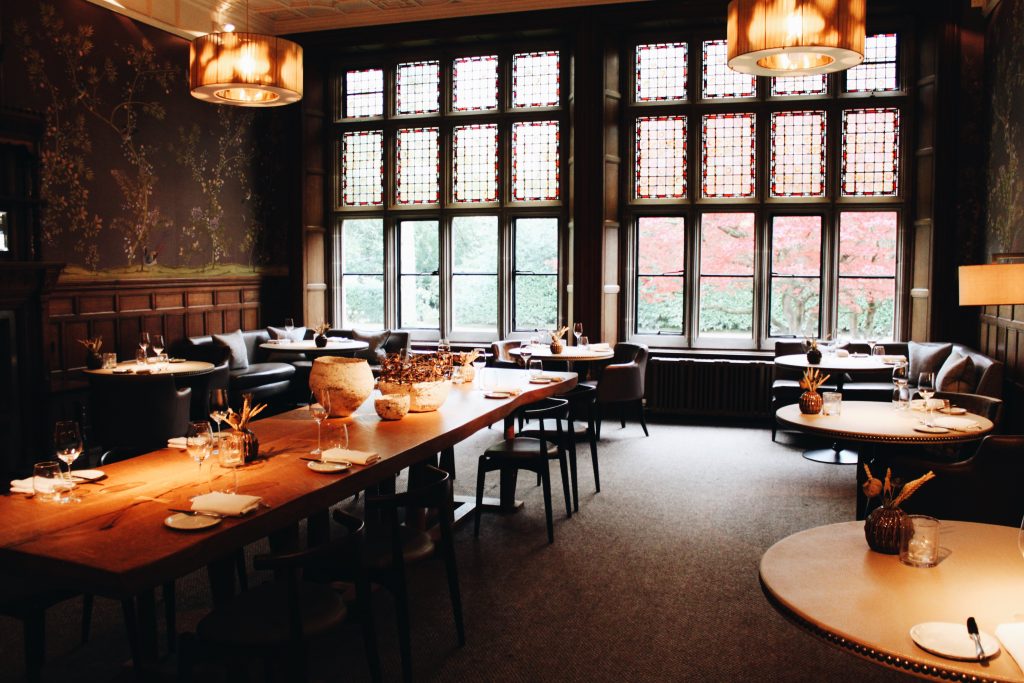 Once we had eaten every last crumb we were asked to follow the waiter into Peels restaurant but he didn’t stop there. He continued on through the restaurant and into a secret door besides the kitchen. We tentatively followed. As we entered the room we couldn’t believe our eyes. Dimly lit and unequivocally romantic, a long table was laid with two place settings side by side facing a window into the chef’s kitchen. Waving at us from the other side of the glass, the chefs then continued with whatever task we had interrupted with our entry. Feeling a little like voyeurs we took our seats with huge big grins on our faces. What a way to start the meal!

An Amuse-bouche with potato and leek sprinkled with leek ash was set down in front of us as one of the chefs explained how they like to showcase seasonal British vegetables in the menu. We delved in to what was the best amuse-bouche I had ever had. Deliciously flavoursome with a slight light smokiness from the ash. Next we were presented with a board of freshly baked white bread. But this was not just any bread. This was the tastiest warm bread we had ever eaten with wagyu beef dripping and home churned butter.

A Sommelier then appears in the room explaining about the wine flight that we were to receive. The restaurant prefers to use organic and biodynamic wine where possible and local wines are preferable. We have found that Sommeliers can sometimes be stuffy and not always particularly warm, but tonight our Sommelier was friendly, knowledgeable and so approachable with any questions that we may have had. To pair with our upcoming starter he decided upon an Ancre Hill Chardonnay from wales. It was light and a perfect match for what was to arrive. Before long our starters appeared along with the chef (each dish was being presented by the chef that prepared it) who explained that we had Beetroot with Bosworth ash, rye and goats cheese ice cream. Beetroot and goats cheese is a classic combination and possibly one of my favourites but the added elements on this dish elevated it to another level. A Michelin starred level. 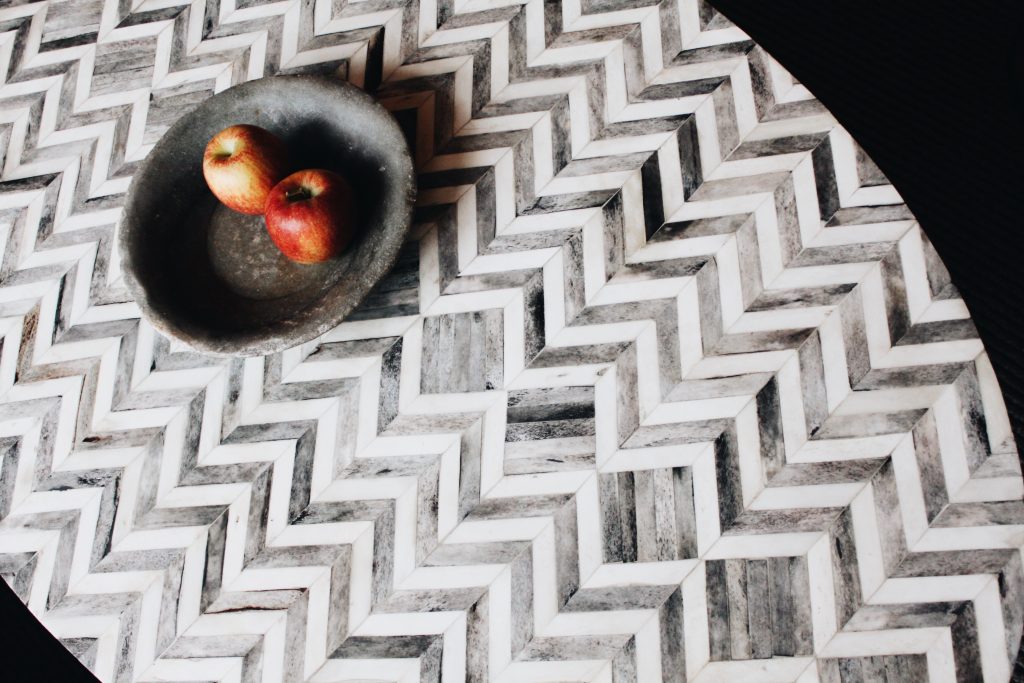 A second course arrived for me comprising of celeriac, black garlic, pearl barley risotto and parsley oil whilst my carnivore date had Middle White Pork with onion broth. Then came the second flight of wine. Main courses were to follow and this was my favourite dish of all. I had white onion with potato, damson, turnip with a homemade potato crisp. The smokiness of the delicately charred onion was divine and I washed it down with a glass of 2015 Blau Frankisch. My date had yet another meaty affair with Turbot on the bone with sprouting broccoli and smoked butter which he seemed to tuck away pretty quickly.

Food doesn’t get much better than this and after our Apple desert with nutmeg and brioche we were almost finished for the night. The Sommelier poured us a glass each of a scrumptious Spanish sherry that topped the evening off nicely. But with drink there has to come food, so I was presented with a cheese plate for 1 (my date is not a cheese fan!) full of local British cheeses all bar one sneaky but delicious French impostor. 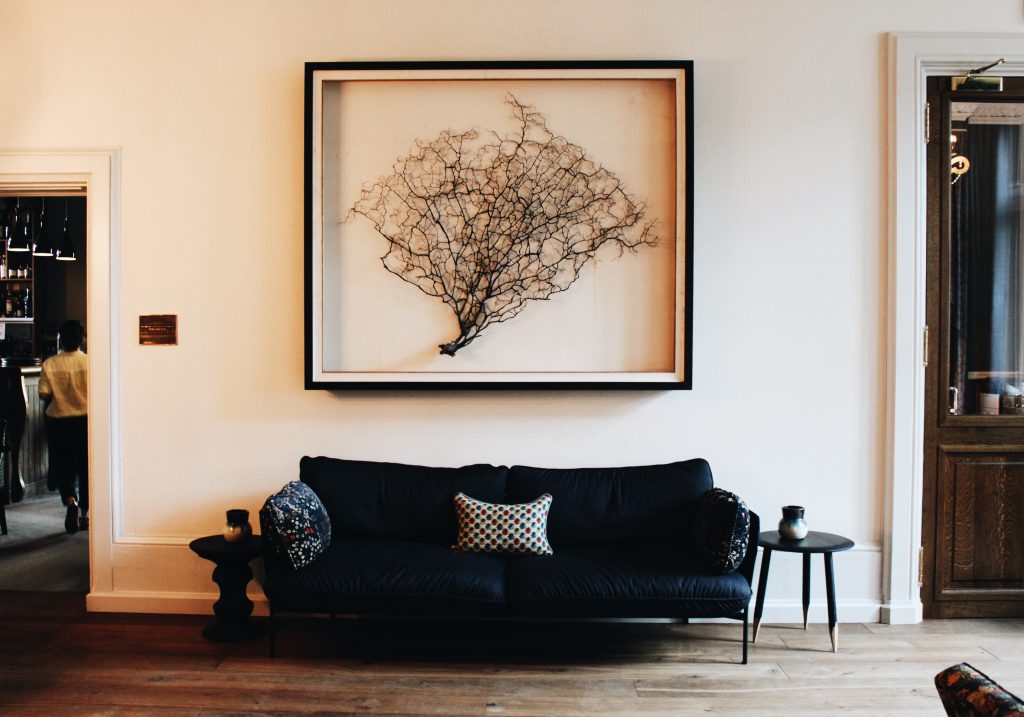 Peels Restaurant and their unbelievably young talented chefs outdid themselves. From the food to the kitchen ethos, we are in love with Peels and Hampton Manor. Hands down the best meal we’ve had all year. So if you are looking for a place to celebrate a special occasion or even just for an extended date night, Hampton Manor has exactly what you’re looking for. A contemporary foodie’s paradise all wrapped up with historic charm and romance.

Dine and stay with breakfast £285pp (based on 2 people staying). For more information please visit hamptonmanor.com/