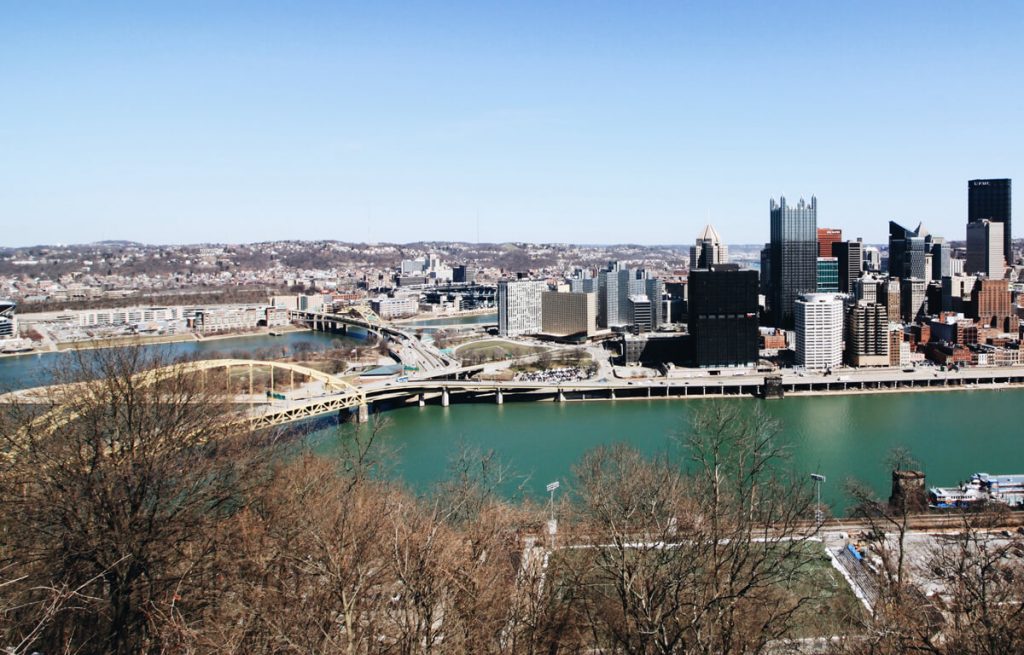 Pittsburgh Couples Weekend –  Things To Do

Pittsburgh. The heart of the rust belt of the USA. Urban and gritty with an exciting mix of culture, passion and new technologies. The historical city has a rich and unique story. Founded on the banks of the Monongahela River, whiskey and steel gave Pittsburgh its basis for growth. Industry runs through the veins of the place. Yet it suffered from de-industrialisation after the War and the city was almost on its knees. Yet, here we are in 2018. The city is now enjoying an exciting re-birth. It’s becoming the talk of the country. Hero and Leander, courtesy of VisitPittsburgh had the pleasure of visiting for a Pittsburgh couples weekend as the city was emerging from a cold winter, with the last of the snow melting off the banks of the rivers. Flying in on a stopover flight with WOW Air from Reykjavik, Iceland we touched down early afternoon. The airport is about 45 minutes Uber drive away from downtown. Pittsburgh it should be mentioned is the main base for Uber testing their self-drive cars. Although our cab definitely had a driver, that zipped us through the rush hour traffic. Pittsburgh is said to be ‘the only city with an entrance’, so coined by the New York Times. This is because its skyline is presented to you as a stunning vista once you emerge through the Fort Pitt Tunnel. Winding through downtown toward our hotel we twist through the high-rise architecture. Amongst the old and the new. Rusted steel against reflective glass. Where architects such as Philip Johnson and Henry Hobson Richardson have left their stamp on the city. Pittsburgh is proud of its heritage and becomes obvious right from the beginning. The passion that residents have for their city is refreshing. After our stay in the City of Bridges, we’ve put together a little 3 day itinerary for a romantic, yet action packed stay.

Bridges of Pittsburgh and the city skyline 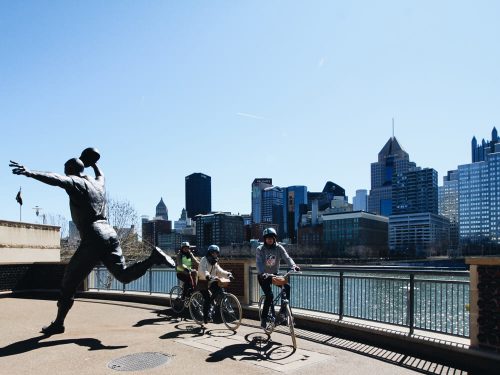 Wake up from your comfy hotel bed, (we stayed in the Ace Hotel. Read our review here) and get to Pamela’s for a super tasty calorific breakfast. We’re talking pancakes, waffles, syrup and deliciousness. So good even President Obama visited. In fact, more than that. He invited them to make the Obama’s and veterans breakfast at The White House for Memorial Day. Now that is a hat tip! So starting your trip here is a great start to the day. Yet you’ll want to work off that big brekkie. So head downtown and get on a cycling tour with Val and her company, Bike The Burgh (biketheburgh.com). It’s a fantastic introduction to the city. Not only is it physical and will make you feel great, you’ll learn way more than any guidebook will tell you. Even walking the city yourself you’ll no doubt miss the best bits. So get on the saddle and get peddling. Val makes the tour leisurely, fun and gives you hints and tips to explore the city throughout your stay. The city in the summer is a great place for outdoor activities. When we went it was a very chilly -5 ! Yet Val made us hot tea and her enthusiasm and local knowledge made us soon forget about the cold. We couldn’t have asked for a better welcome to Pittsburgh. If cycling isn’t your thing then try out the kayak or paddle boat trips on the river. Or for those that wish to sit and take it all in then try Boat Pittsburgh for a pontoon if you happen to be with a larger group. There are also countless miles of hiking routes such as the 24-mile Three Rivers Heritage Trail. Exploring a city outside is what summer in Pittsburgh is all about.

After your sightseeing on wheels, walk over to The Strip District. Low rise urban industrial architecture is prevalent here and it makes for a cool area. Every store front is a bustle of activity where shop owners are busy beckoning tourists in. A huge banner reads, ‘ This is Steeler Country’. A nod to the Pittsburgh Steelers, the city’s wildly successful football team. In The Strip you should head over to Primanti Brothers. You’ll want a decent lunch after that bike tour and sandwiches don’t get any bigger than a Primanti sandwich. The company was founded back in the steel mill days when workers needed a big feed before heading back to the factories. When you’re done eating, continue with your shopping before checking out Wigle Whisky. The distillery is great for tours and learning the importance of the golden drink to Pittsburgh. You’ll come away full of knowledge about the whisky rebellion, George Washington and Alexander Hamilton. Plus make sure you take away a bottle of whisky for sipping back home. The tour takes about an hour and at the end you get to sample the whisky and a gin that they make on site too. You’ll make some friends too to carry on the drinks if you fancy. But, if you’ve not had too much to drink, then jump in a cab and head to the Dunesque Incline. This is where you can take in the incredible views of the city from Mount Washington. The incline is a very steep (30 degree) railroad up the side of a large hill. Mount Washington isn’t a mountain per se, but it’s still pretty high and the incline rises 400 feat in elevation. Completed in 1877 the trip up the incline is a step back in time as you go higher up what used to be called ‘Coal Hill’. Pittsburgh by the way has a lot of hills! It also has the steepest street in the world. And the one of the country’s last remaining wooden streets.

After a busy first day why not have a relaxing dinner. If you’re still up on Mount Washington, then Monterey Bay Fish Grotto is the place to stop at. Not only is it a fantastic restaurant with a great menu to match, but the views are the best in Pittsburgh. This is a ‘sunset-view restaurant’. Throughout Pittsburgh, there are many great places to dine in the city. We’d also recommend checking out Union Standard from head chef Derek Stevens. Here you can get great menu items from the wood-fired rotisserie presenting you a great laid-back welcome from the city’s dining scene. The restaurant looks to take inspiration from the American Northeast, Mid-Atlantic and Appalachian areas of the country. You know there’s going to be great flavours going on. Union Standard is in the stunning and iconic Union Trust Building. A real historic presence on the city skyline. What’s more, whilst you’re waiting for your dinner there’s an open kitchen where you see the chefs in action. Head back to your hotel after an action packed first day and get your head down for your first night in Pittsburgh. 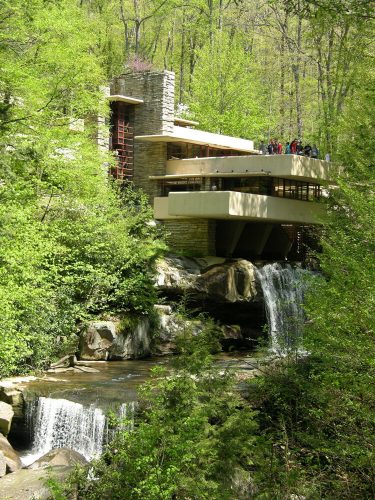 Day Two has arrived and it’s time to take a short drive (60 miles) outside of town for a visit to an architectural masterpiece. Make sure you have a quick breakfast in your hotel. In the Ace Hotel in East Liberty, Whitfield restaurant serves an amazing brekkie. Bruleed Grapefruit or Steak and Eggs are on the menu giving you a welcome start to the day in a super cool hotel. Hit the road without delay because your next stop, Falling Water is architect Frank Lloyd Wright’s most iconic piece of work. Well worth the hour and half drive out to the forest to see the masterpiece. Built in 1935 for retail magnate Edgar Kaufmann it’s nestled in the heart of the Laurel Highlands of the Allegheny Mountains. A stunning house that you can now visit for a one hour tour, an in-depth guided interior tour or a sunset tour. Booking is essential and done on the website. You’ll be able to hire a car from most of the major car rental players located in the city centre. You’ll soon learn why this house is featured in so many architecture books and students learnings. Although you’ll most likely come away thinking that your actual house is so inadequate to this stunning piece of architecture.

Upon returning to Pittsburgh head to the cultural district to catch an evening show. There are 7 world class theatres here, some with a rich history. They contribute to the city’s 22,000 annual events and bringing in a whopping 2 million visitors every year. Get some dinner before your show. The restaurants in the area are more than capable of cooking you a delicious meal and getting you to the theatre on time. Nine on Nine is our favourite for pre-theatre dining. Lobster mac-n-cheese or Wagyu beef sliders anybody? There’s also wonderful shareable sides on the menu for you and your loved one to tuck into.  Then head over to the theatre for an evening’s entertainment.

Start your day with a lazy mindset and head over to Meat and Potatoes for brunch. Be sure to check out their Bloody Mary bar. The gastropub has become a firm favourite in Pittsburgh and its relaxed vibe is easy to fall in love with. Clearly a restaurant to meet friends and enjoy great company in. Chef Richard Deshantz saw an opportunity to create a space where a chef would eat after a busy day at work. Meat and Potatoes was born. And hasn’t looked back since. Located in the heart of the Cultural District, once you’ve finished you’ll be perfectly placed to carry on your exploration of the city. 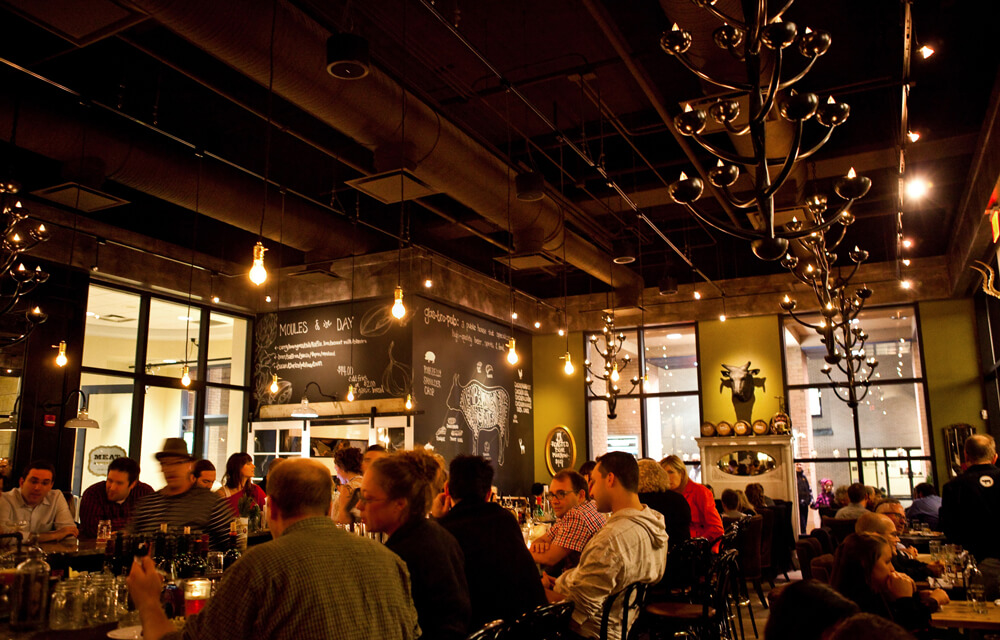 If the sun is shining then head over in a cab to the Phipps Conservatory. Here for over a century they’ve been showing residents and visitors to the city, the wonder of nature. In fact 2018 is their 125 year anniversary. They’re celebrating by putting on many events, talks and public programs. It’s a beautiful green oasis in the city that is wonderful for a walk around the grounds. You can also take a guided tour if you want that level of information that is otherwise unattainable. There’s a butterfly forest where you can stroll amongst the foliage. If you’re lucky the fluttering colourful creatures land on you. Always perfect for some photo-ops. 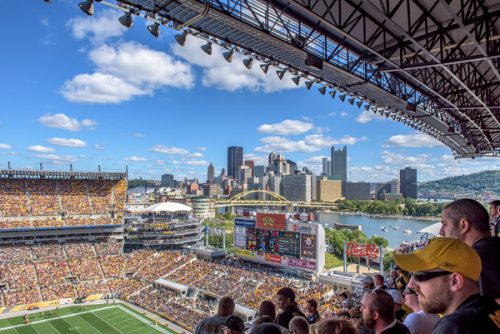 A trip to Pittsburgh wouldn’t be complete without soaking up some of the sporting atmosphere. Make sure you catch a game at either the Steelers, Penguins or Pirates grounds. Remember what we said about the passion here? Well a huge part of that is due to the sports teams. Spend an afternoon in the City of Champions at a game and you’ll understand how passionate residents of the city are. And with their professional teams successes over the years we can see why. The black and gold stand proud in these parts and fingers crossed you’ll enjoy a win putting the crowd in ecstatic moods. If you’re watching baseball or NFL, then head back over to downtown for a beer in a bar. You’ll most likely walk over the Roberto Clemente bridge, one of the cities Three Sisters Bridges. These are the only identical trio of bridges in the United States. Roberto was a loveable character for the Pirates who tragically died in a plane crash far too early in his life. His memory lives on in the name of this gold bridge and his baseball playing bronze statue at one end.

Pittsburgh is an up and coming city that is on the cusp of some very exciting developments. It has the history through its veins to build on its culture. The kind of growth that creates great cities that people flock to. We’re sure that you’ll be hearing lots more about Pittsburgh over the next few years. 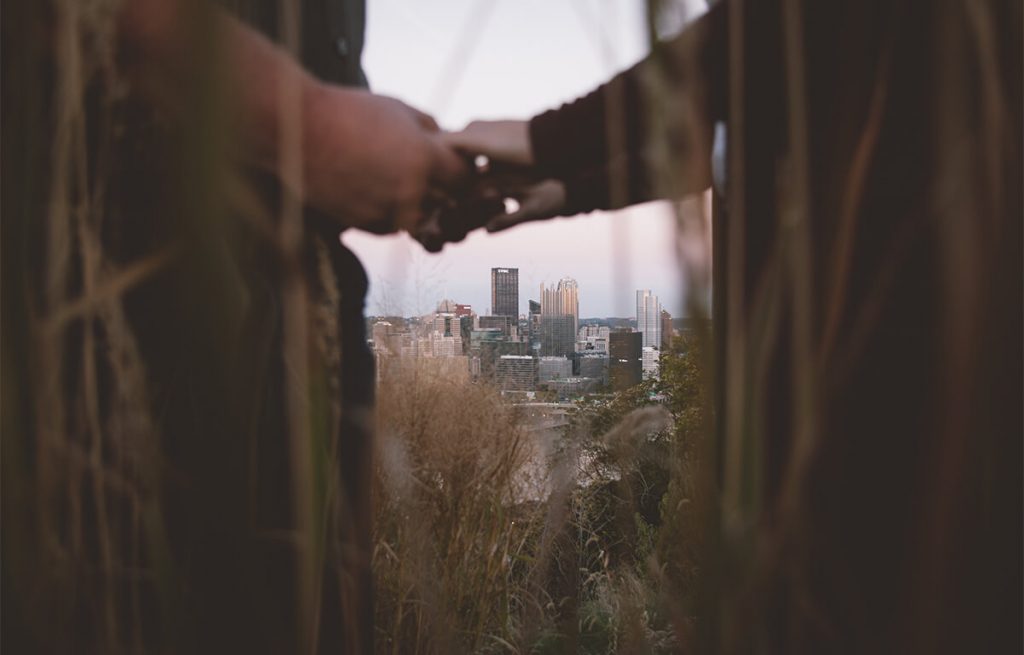