The Park Tower Knightsbridge: the huge, hexagonal hotel that stands like a supersized honeycomb opposite Hyde Park. But rest assured, there’s no risk of monster bees swarming around this building. The buzzing you hear comes from luxury sports cars revving around Knightsbridge.

Actually, I’m in one. So on this particular afternoon, the yellow beast stinging the streets of West London is a Ferrari in Giallo Modena. Of course, it’s completely harmless…if I’m not behind the wheel. Thankfully my partner in crime is a pro Racing Driver and makes a steady beeline towards the hotel via Lowndes Square. What a location! Harvey Nichols next door, Harrods down the road and a Royal Park so close it could pass off as being the hotel’s own backyard. 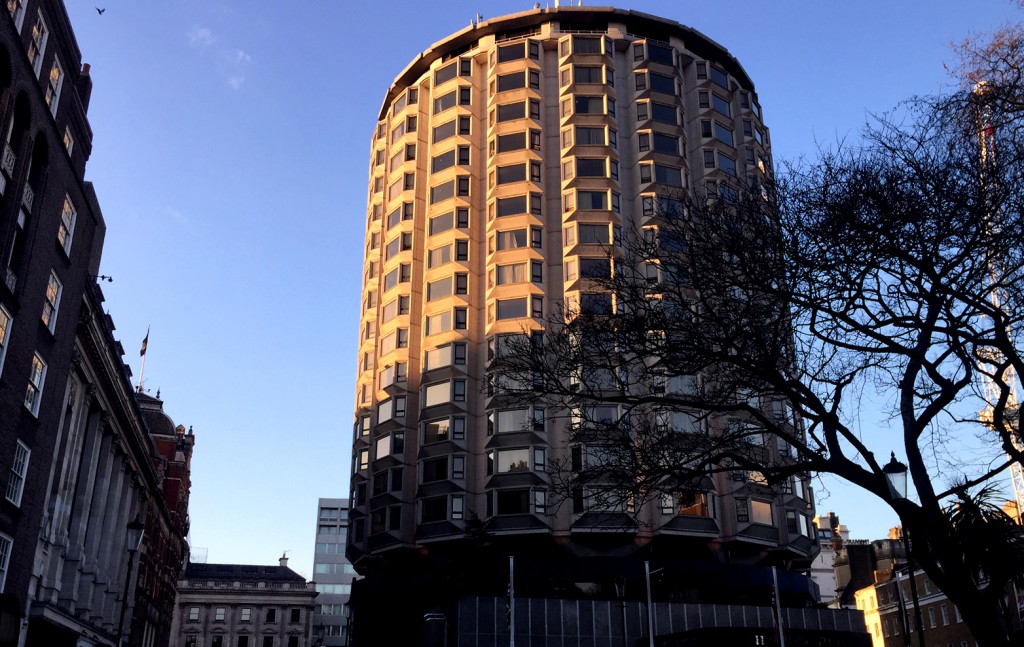 Under the low glare of Spring’s evening sun, The Park Tower Knightsbridge gleams in its full glory. Here’s to the power of flattering lighting! Because let’s be frank about it, Richard Seifert’s post-war building isn’t the most decorative piece of concrete in the capital. Yet there is definitely something alluring about the way it holds its own in one of London’s most glamorous neighbourhoods. Despite the blatant mismatch of its aesthetic, this structure exudes self-confidence and that is always attractive.

Anyway, don’t they say it’s what’s on the inside that counts? Well, surprise! Because hidden in here is a jewel of a hotel. Admittedly, I’d underestimated what I was in for. So if these next few lines make me sound like a hyper fangirl, it’s because I am one.

Once through the swivel doors, you are somewhat dazzled by an iridescent decor of chandeliers, luminous floors and a stunning congregation of orchids. It’s like being injected with a shot of harmony. My favorite room is the lounge, as it’s enveloped in an exquisite silk Chinese wallpaper of painted branches and delicately embroidered petals, wrapping around the room as if you’d walked into a magnolia orchard. Stepping into The Park Tower Knightsbridge is delightful at every turn, like opening the pages of a pop-up book about a charming, enchanted garden. 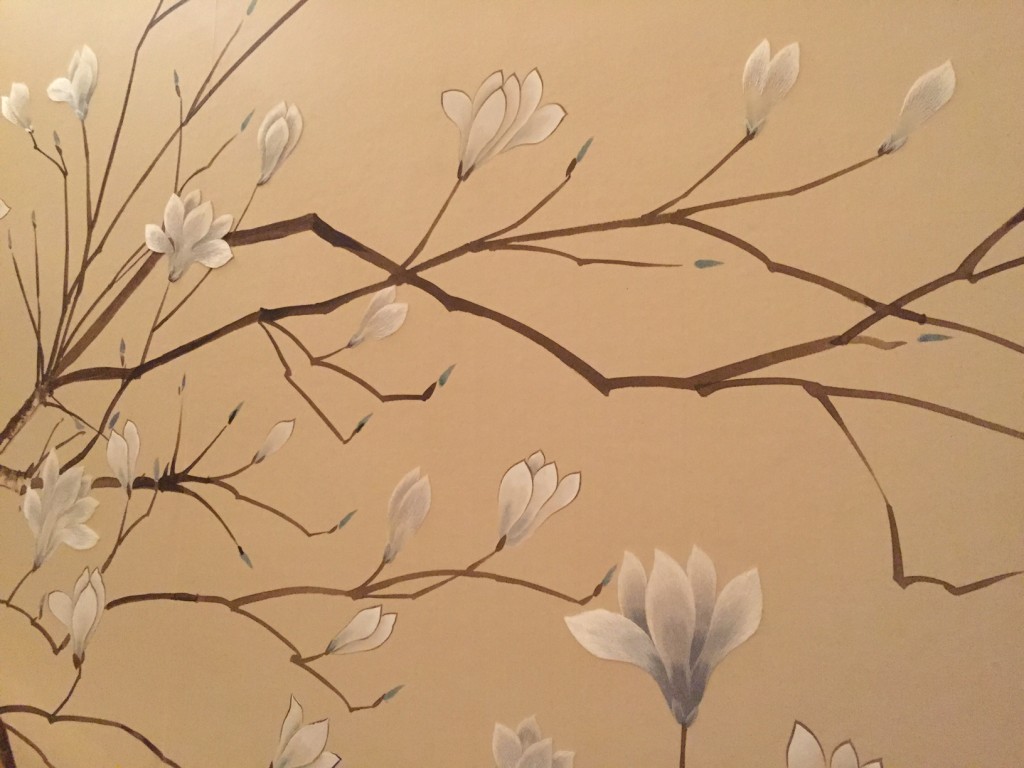 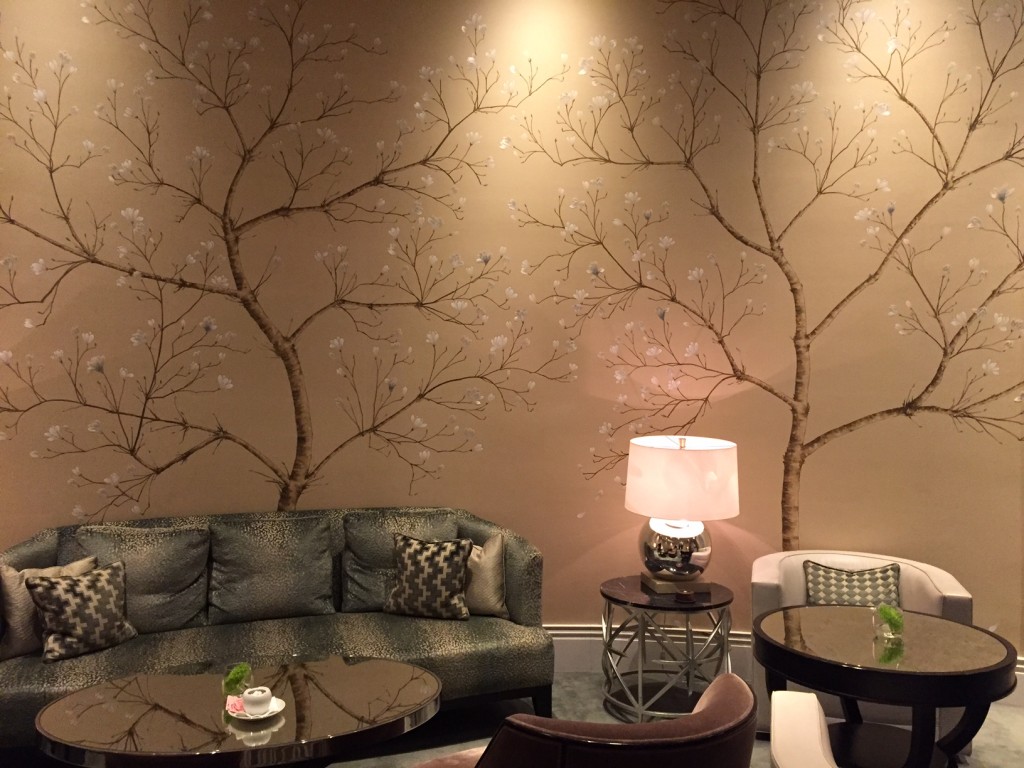 Speaking of charming, the staff are polite and attentive. The team here operates like polished clockwork. Ding-dong, tick-tock: I like that. We were shown around by Antonio, effortlessly slick in his thick rimmed spectacles. Italians do know style, don’t they? He took us to our room on the fifteenth floor, right at the top of the tower.

And bam. No, I mean BAM! What a view. I’m not talking about a gentle breathtaking view, where your brain coolly drinks in the smooth beauty of the panorama. This one right here actually whacks you in the eyeballs with its outrageous splendour. Ok, it’s not quite as aggressive as that. But really, from this window, London couldn’t have done its Londoners more proud. 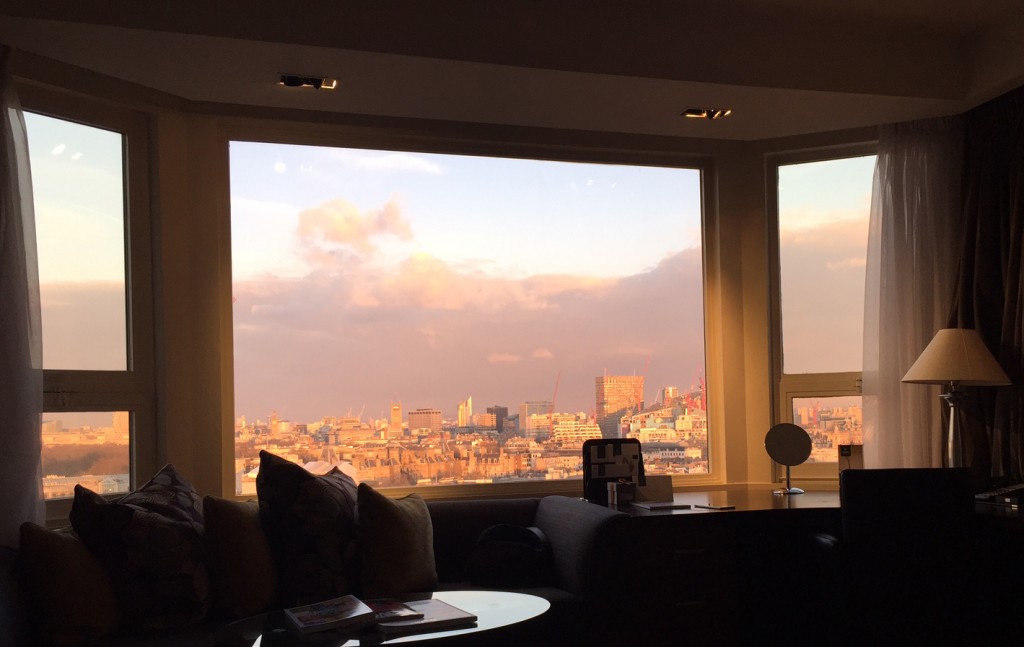 The glass panels projecting onto the cityscape are generously tall and wide, like you’re looking into an urban aquarium. No flying-fish out there though, so while my subaqua knowledge wasn’t called for, I could have done with swotting up on the London landmarks. Fortunately, with the help of the Racing Driver, we could identify most of them. From Hyde Park, across to the Wheel, the rooftop of Buckingham Palace, the flags of Tower Bridge, and the collection of skyscrapers over in the City: the Walkie-Talkie, the Cheesegrater, the Shard, and the Gherkin. Yes, I’d say we had it all.

The view is so tantalizing that at one point I had my face pressed against the glass, trying to see around the corners. I’d love it to rotate for a 360 degree visual feast, Thunderbirds style. Yet already looking about the room, all systems are go in here. The bed, set in a lacquered wooden frame against a curved leather wall, reminds me of the master bedroom in a luxury mega yacht. The bathroom, stocked with Molton Brown, was singing in glossy marble and properly illuminated…praise the Lord! Every woman knows you can’t get dolled up for dinner in dim lighting. Even though room service to our pad in the sky would have been a treat, we were happy to have a reservation at The Hyde Bar downstairs. 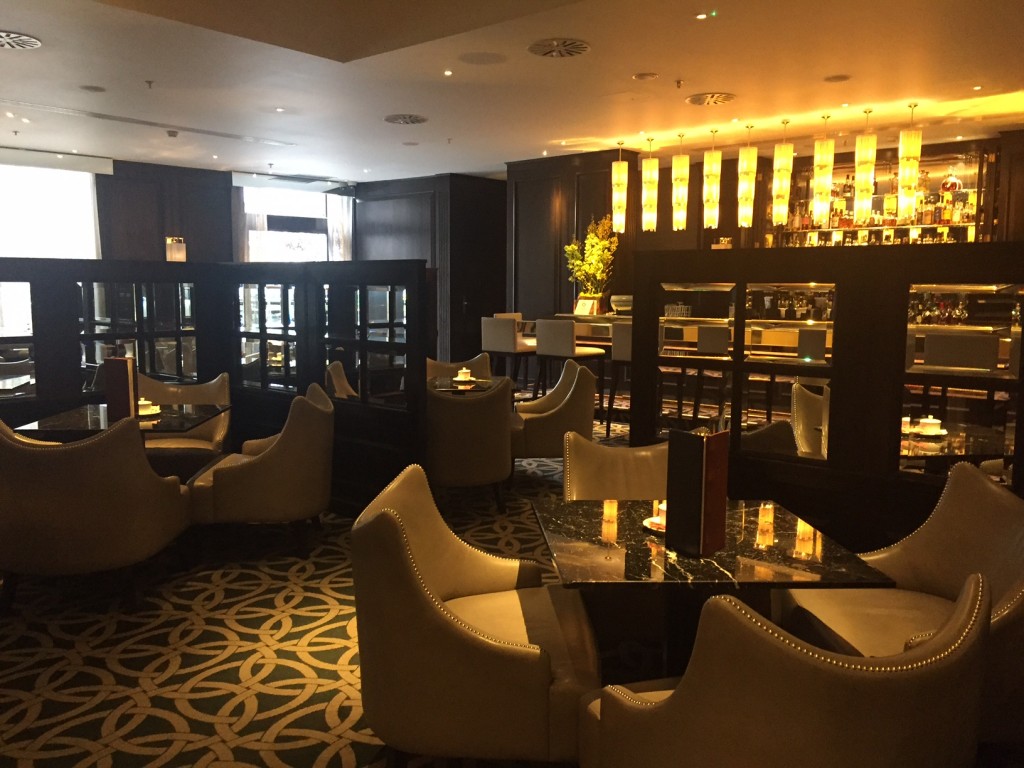 Just as well that we did, because it is here that I met another of the hotel’s assets: our waiter, Santo. Discreet, efficient, knowledgeable and fun. Santo Cielo! This man is all the saints rolled into one. He cruised over to us with a Negroni and an Old Fashioned…cheers to kicking off a Sunday night the right way! By the looks of things, we’ll be wrapping it up the right way as well. This bar is famous for its collection of 130 international premium brands of whiskey. They glow like bottles of caramel behind the barman and their glimmer is contagious. Separating the tables are glass partitions, throwing a glitzy and ritzy mellow haze around the room. The other diners seemed equally relaxed, easing into the evening as the weekend tapered to a close. 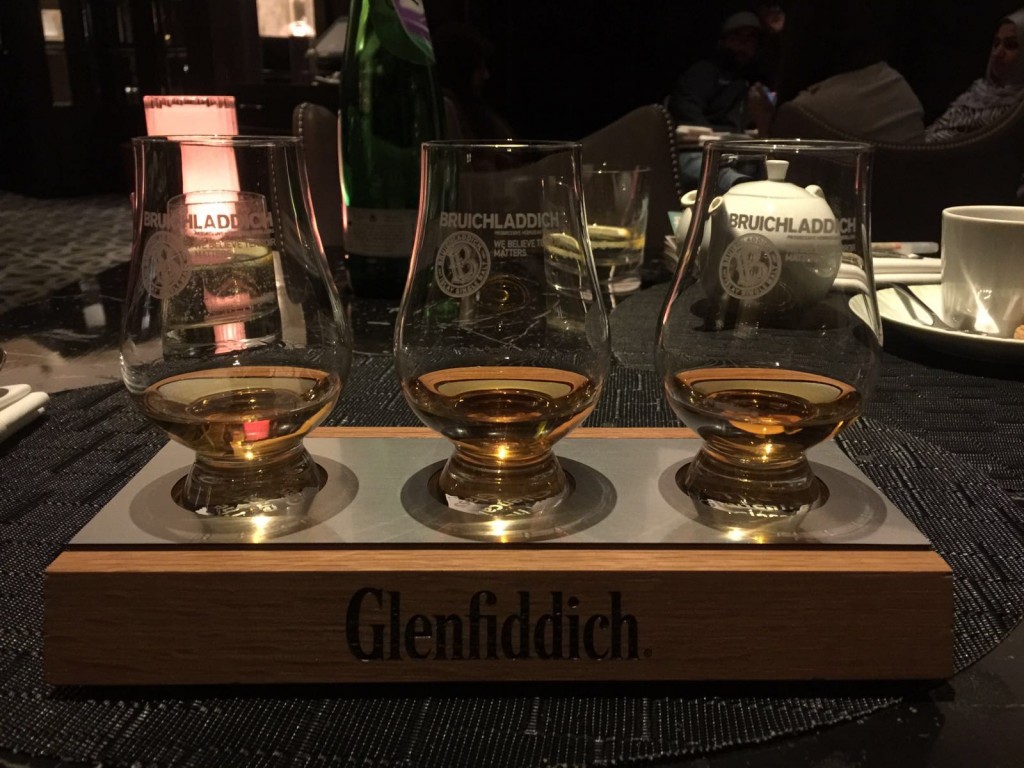 The menu is a mix between sophisticated poolside bar food and brasserie. To begin with, the ‘Ocean Board’ swam over to the table on a black slate stacked high with gravlax, crab cakes and calamari. Next, we went for the grill: Surrey Farm organic fillet steaks, with the entire selection of sauces (the bearnaise could make for a delicious meal in itself); and so many sides there was barely space on the table: brocolli, spinach, mashed potatoe, chips, mushrooms. What a feast. Ok, it didn’t stop there. We also had the chicken caesar salad and The Park Tower club sandwich, because you’ve got try the house special, right?

I’d like to say we ate like kings, and we did. But it was even better than that: we ate like total spoilt brats. What I’m most thrilled about is their beef fillet. Who knew one of the best steaks in town was hiding at The Hyde Bar? I want to go back for another as I write this. The cherry on top of all our indulgence was the wine: red, Italian, Tuscan. A fine bottle of 2010 Ruffino Greppone Mazzi Brunello di Montalcino.

We certainly were in safe hands with Santo. Do I have to admit we also had dessert? A slice of rich chocolate cake, like the one fresh out of Roald Dahl’s Matilda. With icecream. Don’t scream, diet starts tomorrow! 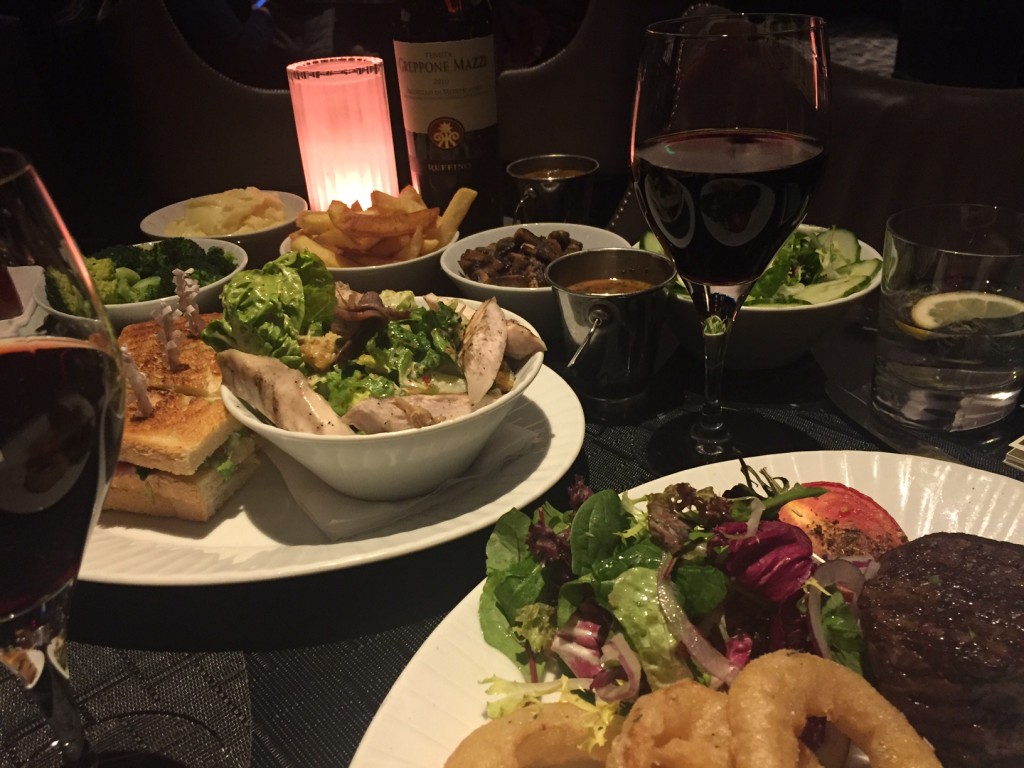 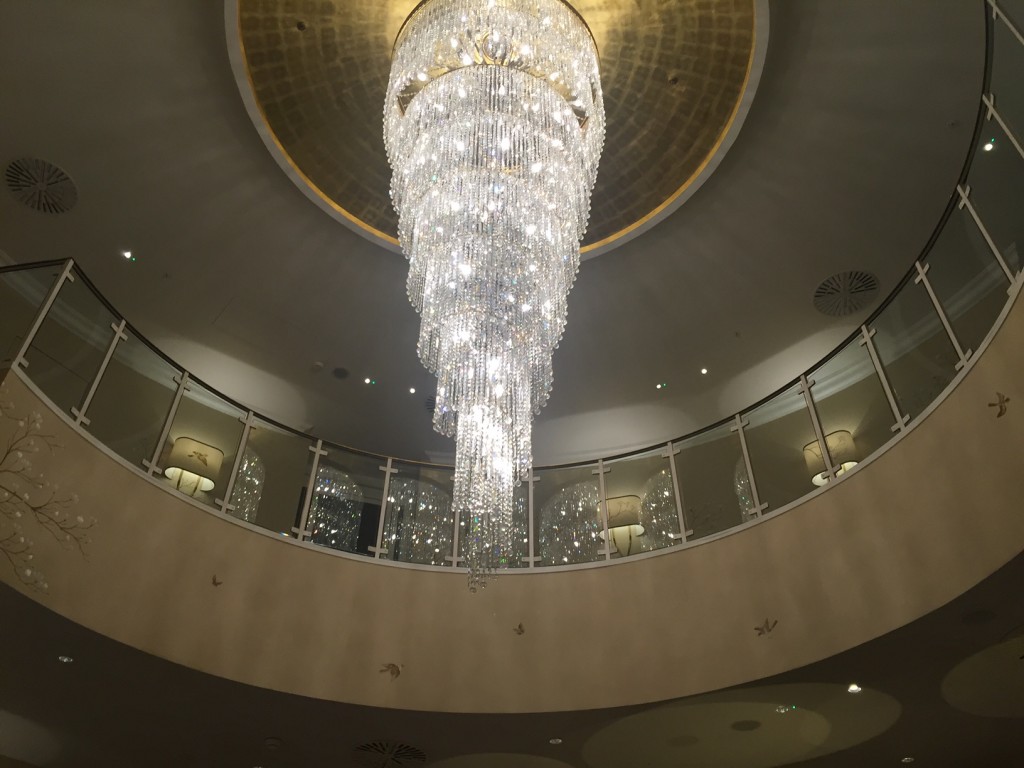 After dinner, as I sat happily licking my whiskers, along came the whiskey. A flight of Glenfiddich flew over to the Racing Driver. And meanwhile, an Amaretto to me, with a round ice-cube plopped in the glass like a golf ball. Talk about a hole-in-one, this was a fantastic evening.

At midnight we returned to the fifteenth floor where London had been busy changing scene. Red and yellow lights sparkling away, as if the whole city were having a party. The bed was soft and fluffy, and at that altitude, I can say that I really did feel cocooned in a cloud. I’d definitely recommend sleeping with the curtains wide open. It’s exciting to be woken up by the light of dawn with this kind of a vista wishing you a good morning.

Down for breakfast at 8am and over coffee I realised something important about this hotel: the sense of calm that permeates the whole place. Despite being on the main Knightsbridge road on a Monday morning at rush hour, even this room managed to preserve total tranquility.

Breakfast is served in the One-O-One restaurant and while there was enough on offer in the buffet and on the menu, it had quite an act to follow after the extravaganza of the night before. It is, however, somewhere you could happily spend the morning reading the papers while filling up on the full works: from pancakes and pastries through to fruit salad and scrambled eggs. I particularly like the way the coffee pot is left on the table, ready for you to help yourself like a welcomed guest at a friend’s house. And the waiters this morning, as ever, have all woken up on the right side of the bed.

After snacking on croissants and sausages, we made a swift check-out with a plane to catch. We’d left the car conveniently at the NCP garage just adjacent to the hotel, parked up in the company of similarly shiny machines. It’s like they’ve got a secret elite collection going on under there. Out through Lowndes Square again, we drove off on the streets that only moments ago we’d been looking down on.

As pleased as I am with The Park Tower’s revamped interior, what I am equally impressed by are the staff. It’s like the whole team achieved flying colours at finishing school. While the hotel might be stuck in its unique architecture with nicknames like the Honeycomb, the Cog or the Corn-On-The-Cob (it’s amazing what a little Google search will pull up), I’m inclined to call it the Oyster. Because despite its slightly gnarly exterior, The Park Tower has produced a polished pearl.