The seven-star Aman Canal Grande Hotel in Venice is the new incarnation of Palazzo Papadopoli, one of the eight palazzi monumentali (Venetian Palazzo) in the city. Situated not far from the Rialto Bridge and easily identified by the two white obelisks on its roof, it was built in 1550 and later sold to the Tiepolo family who filled it with treasures, built up a great library and commissioned exquisite frescoes. In the nineteenth century it was sold again, this time to the Papadopoli family from Corfu who had the grandest floor, the piano nobile decorated in sumptuous style. They also bought the adjacent properties and razed them to the ground in order to create the largest garden on the Grand Canal. 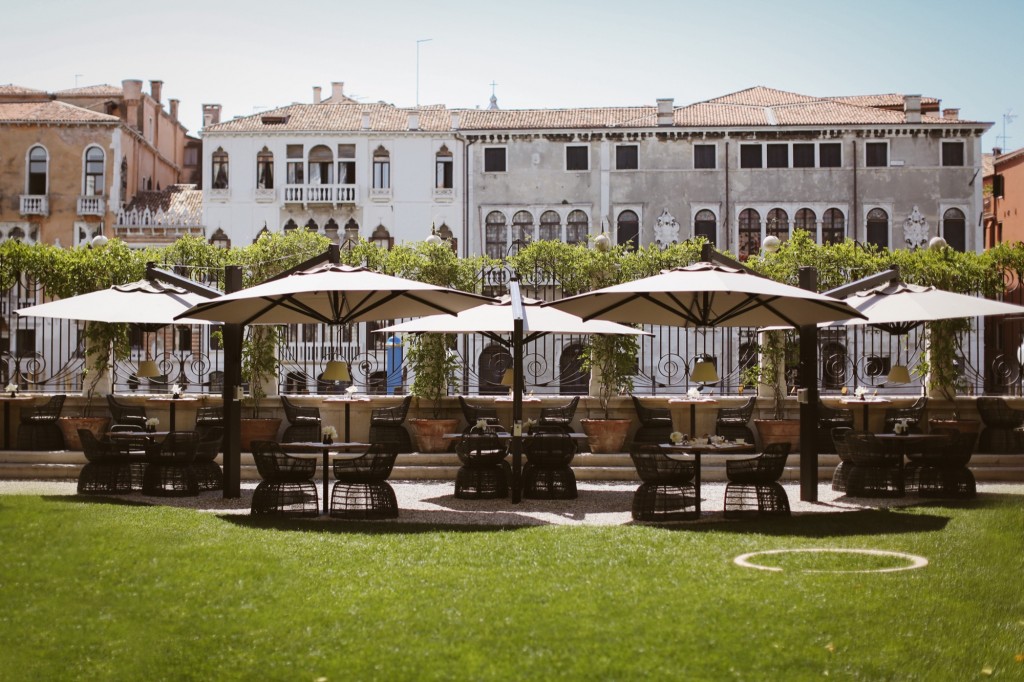 The palazzo is now owned by Count Gilberto Arrivabene Valenti Gonzaga. As an example of how things have changed over the years he remembers that when his father was growing up in the palazzo in the early years of the 20th century, 86 people lived there, six of whom were family members, the remaining were 80 household staff.

Gilberto still owns the Venetian palazzo and he and his family live on the top floor. Even when the upkeep was devouring their finances and they ‘knew something had to happen,’ they did not want to move. Thus when Adrian Zecha the creator of Aman Resorts approached them and agreed to rent the palazzo rather than buy it, Gilberto agreed. It took a while to find investors but now Aman manages the hotel while the Arrivabenes retain the freehold. Then began one of the most extensive and impeccable restorations even seen in Venice, resulting in what Gilberto feels must be, “perhaps the most beautiful hotel in the world.

The fact that it is a hotel does mean that it is possible for members of the public (at a price – it costs from €1100 to €3200 per night) to live the epitome of palace life on the Grand Canal. The cost however means it would have to be a very special occasion for most of us. There is however, a less expensive way of glimpsing of the sumptuous interior – to dine there.

This we did in the Yellow Dining Room which must be the most romantic room on the planet in which to eat. Anticipating a good meal is always a pleasure in itself but as we sat sipping beelines and admiring the glorious ceilings painted by Cesare Rolta, the candelabra, the impressive cherub – encrusted marble fireplace and the walls covered with exquisite Rubelli silk, we knew we were in for a very special treat.

We were not disappointed. While the executive chef Akio Fujita from Hokkaido in Japan has headed the team since the hotel was launched, he has recently been joined by a new creative culinary consultant David Oldani who has added ten dishes to to the superb menu and in fact all the dishes we ate were his inventions.

We (everything looked so good we both tasted each dish) began with a strange sounding but delicious hot/cold antipasto of caramelised onion in a sort of ice cream of Gran Padano cheese – and another of the typically Venetian vinegary fish dish, ‘in saor’, this time Mackerel in a raspberry vinegar. Our primi piatti were Saffron Risotto, the saffron prettily circled round the rice and Spaghetti with Monteveronese cheese, a hint of lemon black pepper and horseradish. For our main courses we chose a fish and a meat dish; Brazzino e Caviale D’O Seabass with Davide Oldani’s specially prepared Caviar and – Anata Apicus – a very delicious duck dish.

This should have been enough for a couple who claim they usually only eat two course but an Apple Compote with Thyme Scented Ice Cream slipped down well and then who could resist a Tiramisù in Venice? Especially a white tiramisu…

How To Dine In A Venetian Palazzo | Tiramisu| Ç bianco

Everything we sampled was full of flavour, perfectly cooked and presented attractively. The service, as always with Aman, was discretely attentive at all times without ever being over zealous.

If a request is made to the Food & Beverage Manager at the time of booking a meal, non-residents can visit the palazzo’s magnificent public rooms. We had already admired the main staircase which rises through two levels to the magnificent piano nobile with its balcony overlooking the Grand Canal. Another staircase leads up to the Salon, a quiet lounge also with views of the Canal. Here, a grand piano and sofas make for perfect relaxation. The point was made to us that although the building is huge it only houses 24 guest suites so one often has these rooms to oneself as if in a private home. Next to this is the library containing the family’s book collection and also a rare panel of gold-embossed Cordoba leather dating from the sixteenth century. When the repairs on this started, tiny fragments of leather were found behind it as if storied in readiness for the restoration 400 years later. 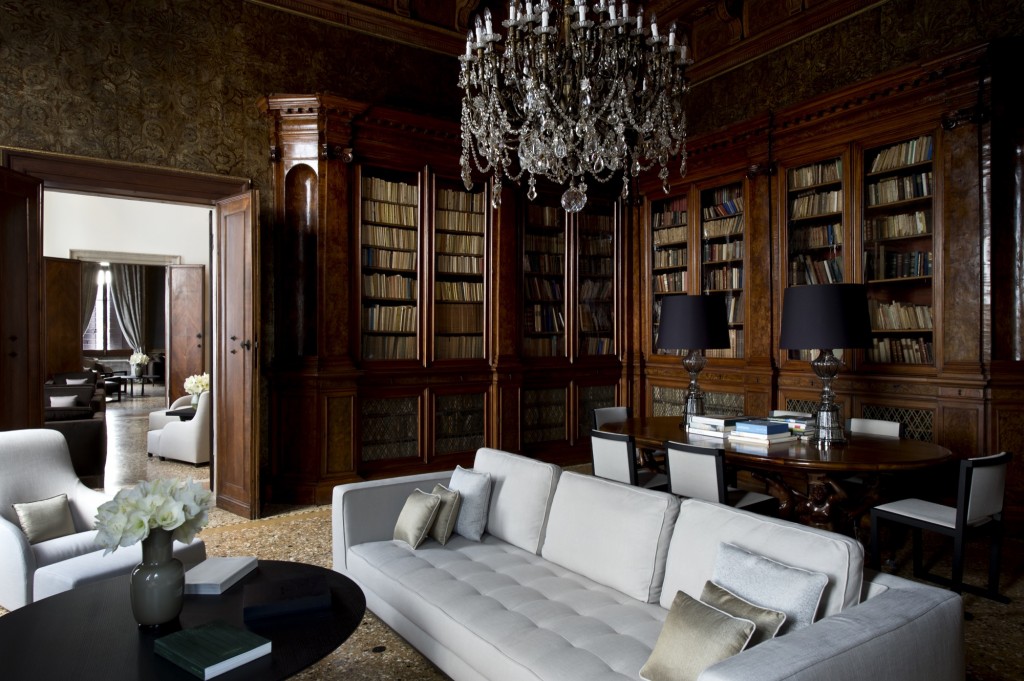 To have eaten a fabulous meal and wandered through these opulent rooms was an unforgettable experience and the moon was shining above us as we left and made our way, replete and happy, through the twisty calli and onto the vaporetto. As we sailed down the Grand Canal, we reflected on the great and the good who had passed this way – Venetian Doges and Nobles, Casanova, Byron, Marcel Proust, Henry James and even George Clooney who had his wedding breakfast at the hotel. None of them, we decided, could have enjoyed an evening more than we had. 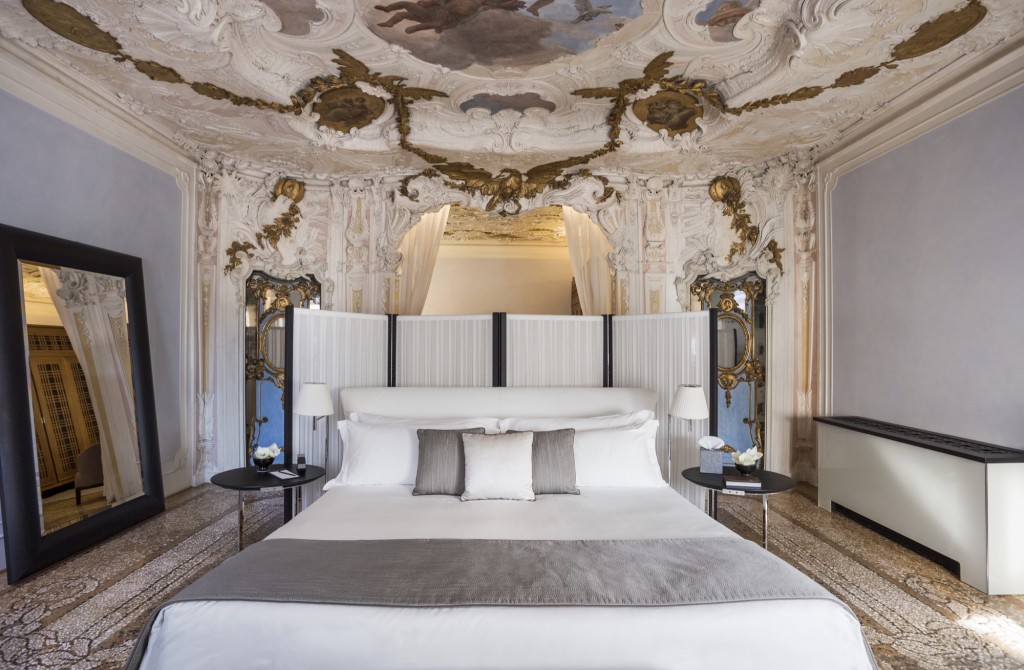