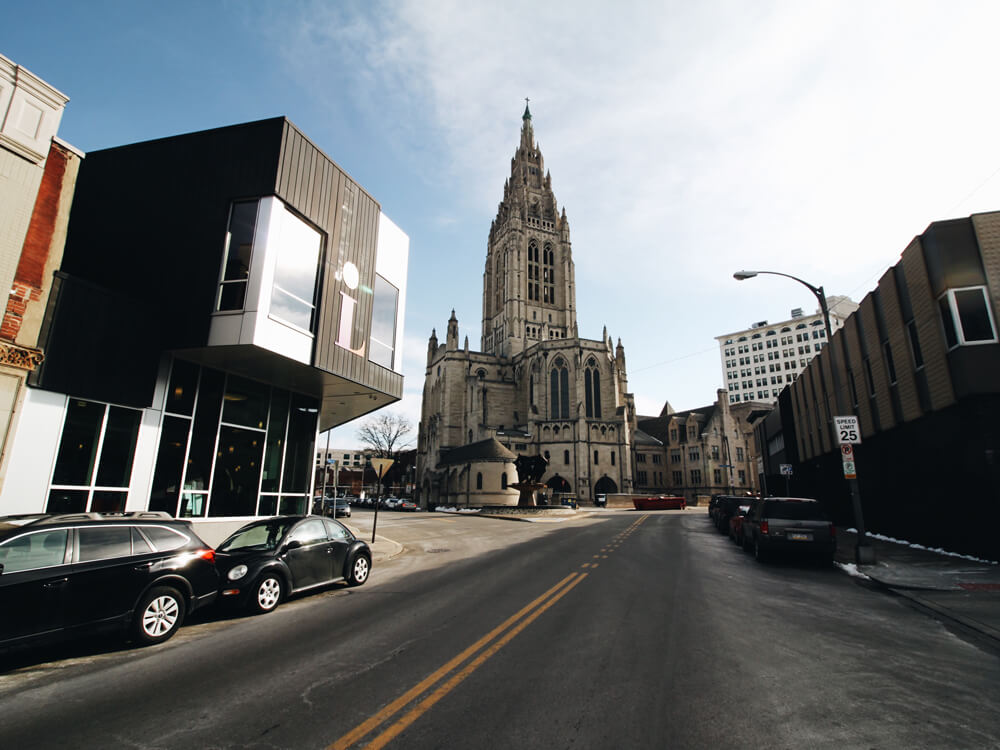 There is something so thrilling about exploring a city that is on the cusp of a worldwide boom – and Pittsburgh is that city. No longer banished to sit in the shadows of Philadelphia, Pittsburgh is now well and truly holding its own.

It may still have a little way to go in terms of regeneration but the gritty and industrial vibe is what makes it so appealing to outsiders. Now is the time to visit. Pittsburgh is in the most exciting transitional period of any US city we have visited in recent years, not to mention it has the most fascinating history.

Pittsburgh is a city for millennials, foodies, sports fans, technology buffs, students and art lovers. But in true H&L style we like to discover the unconventional in a city that is already full of quirks. Here are the top 8 alternatives things to do in Pittsburgh as a couple.

Sip on a whiskey based cocktail whilst learning the history of the Whiskey Rebellion and how they turn organic, local grain into award-winning whiskey, gin and rum – we recommend the Malted Rye. The gin is also delicious! After the tour we recommend hanging out in the rowdy tasting room to try the tasting flights or one of every cocktail on the list! Don’t forget to purchase your favourite spirit to take home. 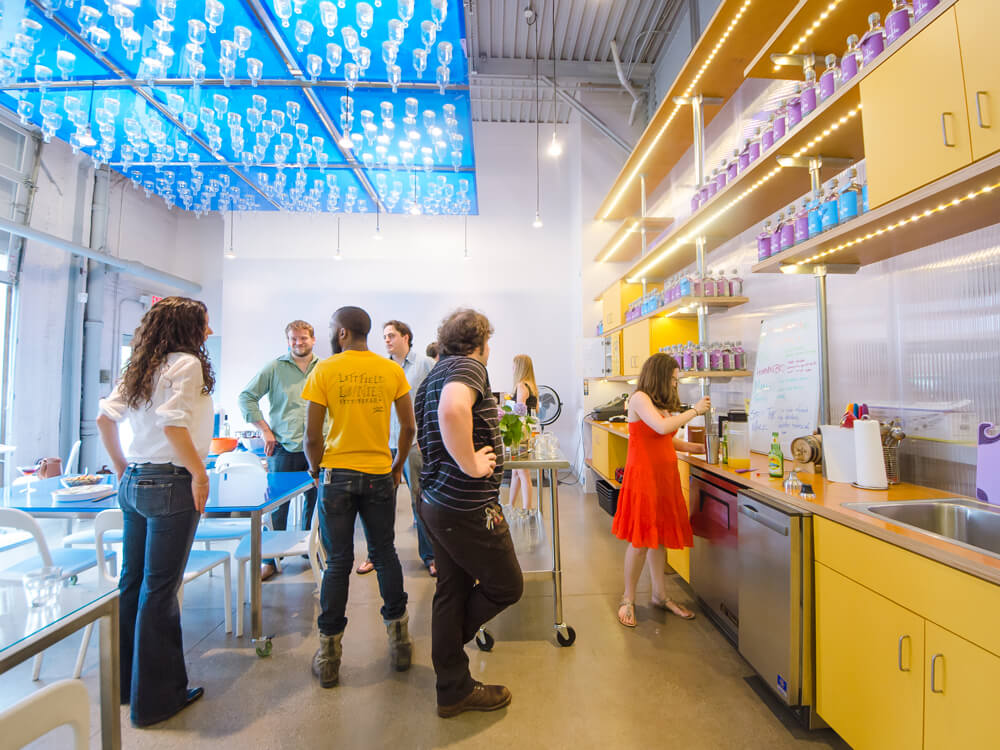 Discover The Beauty Of The Burgh By Bike

For first time visitors to Pittsburgh we could not recommend the ‘Bike The Burgh Tours’highly enough. We were only visiting for a few days and wanted to fit in as much as possible and the Beauty of the Burghtour allowed us to explore the city in a different and sustainable way- after all, you can only cover so much ground on foot!

Our guide, and owner of Bike The Burgh, Val was incredibly knowledgeable and made the experience so enjoyable, even though there was a wind chill of -10° C! The 3-hour Beauty of the Burgh tour explores the rich history and culture of Pittsburgh and covers the must-see stops for tourists.  Cruise through the cultural and financial districts, learn about the regeneration of the city and take in the view from North Shore.

Bike paths are becoming more common in the city centre so there are only small portions of the tour on the road with cars. The tour feels safe and is taken at a leisurely pace with frequent pit stops for photographic opportunities.

For more information and to book please visit www.biketheburgh.com/

Despite the name, Shadyside is a quaint neighbourhood with beautiful tree-lined streets, picture-perfect Victorian houses and possibly the best vintage shops we’ve ever come across! Shadyside is not a tourist hotspot so if you want to experience Pittsburgh like a local (or feel as though you have stepped foot onto a movie set) then it’s a great place to visit.

We love a good vintage shop and Shadyside has 2 of the best in terms of stock and price points. All too often vintage stores are now full of pricey undesirable pieces – since when did 90’s fashion become vintage?! But if you are looking for the real deal, original 30’s gowns, 40’s frocks or 50’s brocade two-pieces, then Pittsburgh has 2 unreal must-visit stores.

Hey Betty!is an Aladdin’s cave of high quality curated pieces that you just can’t find anywhere else. This probably explains why the likes of Chloe Sevigny and Helen Mirren have purchased unique pieces from the store. Unfortunately we had a baggage allowance otherwise we would have bought even more than we already did!

Eons Fashion Antiquesis just a few stores down from Hey Betty! and is a compact nook of a shop. It is packed to the rafters with an eclectic mix of clothing and accessories spanning the decades. We bought the most fabulous original 1950’s beaded dress for $10! It does need a little work doing hence the price but well worth it. The staff are friendly, knowledgeable and helpful and you could spend hours in the store browsing. 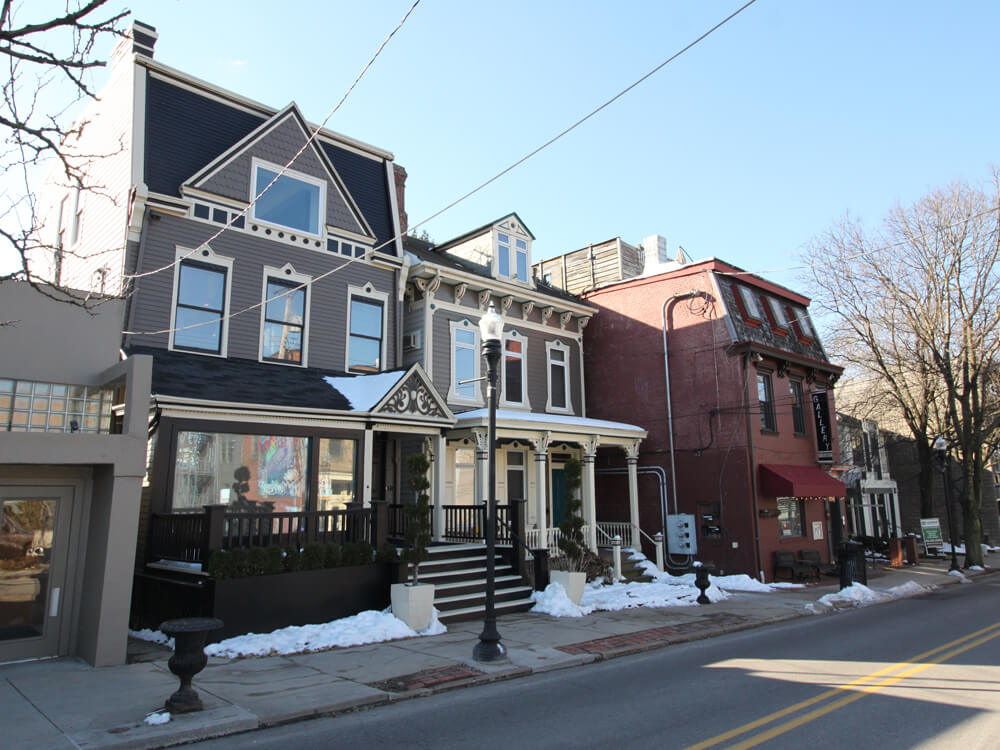 Now we’re going to be honest – we didn’t know that this was a thing until we were kindly told by Val (from Bike the Burgh Tours). But as soon as we found out we were straight on it! We love food so tracking down the 3 P’s was so much fun and a must for any couple visiting Pittsburgh.

Pierogies–Pittsburgh did not invent the pierogi but they have adopted this Eastern European comfort food as their own. In fact we’re not sure we’ve ever come across somewhere so devoted to this delicious dumpling – they even have dumpling races at the Pittsburgh Pirates games! If you are unfamiliar with what a pierogi is (and we were), it is a potato stuffed dumpling served with sautéed onions and sour cream but interesting variations can be found all around the city.

Primanti’s– Primanti Brosis a Pittsburgh institution that has developed into a popular chain of sandwich shops found in the Eastern States. Founded in 1933, the Primanti sandwiches were for the working man in the Strip District. Their Almost Famoussandwich was a hearty treat for hungry workers as was (and still is) packed with beef, turkey or pork, slaw, cheese and fries all piled high in thick Italian bread. A delicious Primanti’s sandwich is a must for any Pittsburgh visitor, just don’task for the fries on the side! They have a few locations in the city but if you do want to visit the original in the Strip District be prepared to queue.

Pamela’s Diner – Thrust onto the map by a visit from former president Barack Obama, Pamela’sis a destination for any foodie visiting Pittsburgh. The Obama’s have been long-time fans of Pamela’s ever since their first visit to the Strip District in 2008. It is widely known in the city and the surrounding area that Pamela’s pancakes are what draws the Obamas to visit each time they come to Pittsburgh. That and the fact that the owners of Pamela’s were invited to the White House to prepare pancakes for the former President! No trip to Pittsburgh would be complete without a pancake breakfast at Pamela’s. 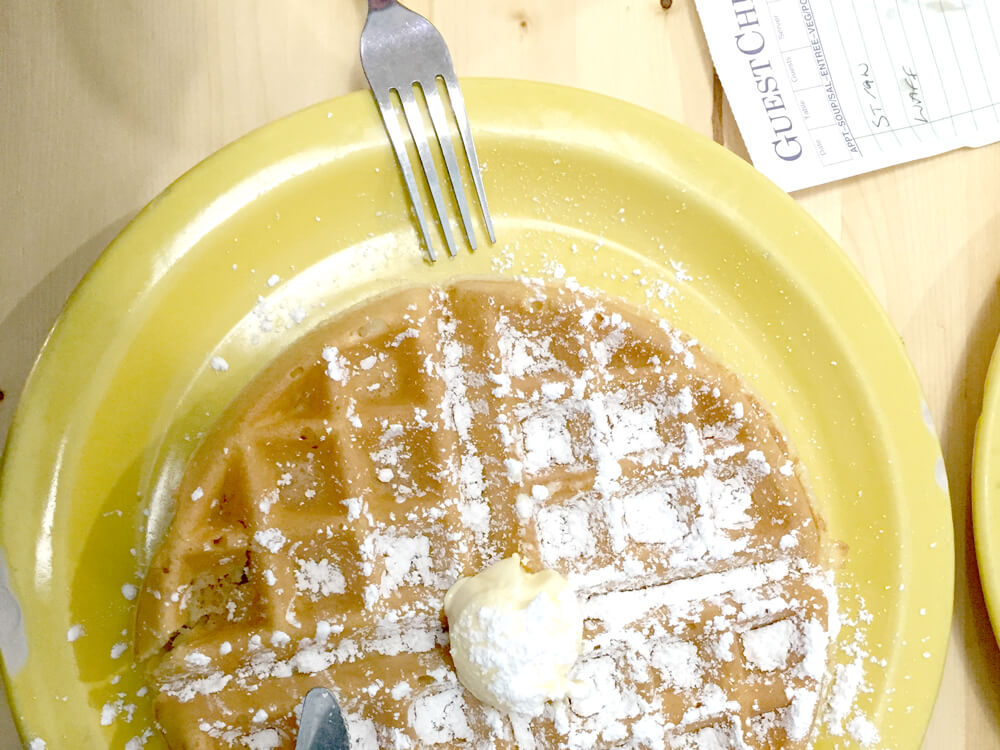 Say Cheers At The Alter At Church Brew Works

St Johns Baptist Church has a long and complex history within Pittsburgh dating back to 1878. It has survived a fire in 1915, the First and Second World Wars as well as the Depression but in 1993 the doors were closed and the church lay dormant for 3 years. Thankfully construction for Church Brew Works began in 1996 and once again the building became a social hub for the community.

The Church was restored to its former glory and the attention to detail and reuse of original features helps to create the authentic buzz. The bar has been built from oak planks salvaged from the original pews and the cool uncovered flooring was hiding under plywood for 50 years. The most striking part is the brew house on the Apse where the steel and copper tanks take centre stage.

To eat dinner and drink beer in a Church may seem like an odd experience, and maybe it is, but what a fun way to repurpose an old building. The quality of the beer is sensational. We recommend trying the Pious Monk Dunkel which is a dark style lager with a crisp roasty aroma. It was also awarded the silver medal in 2012 at the Great America Beer Festival.

The food selection draws on the diverse nature of Pittsburgh and its neighbourhoods. We suggest trying the pierogies to complete one of the 3 P’s.

And on the eighth day…man created beer! 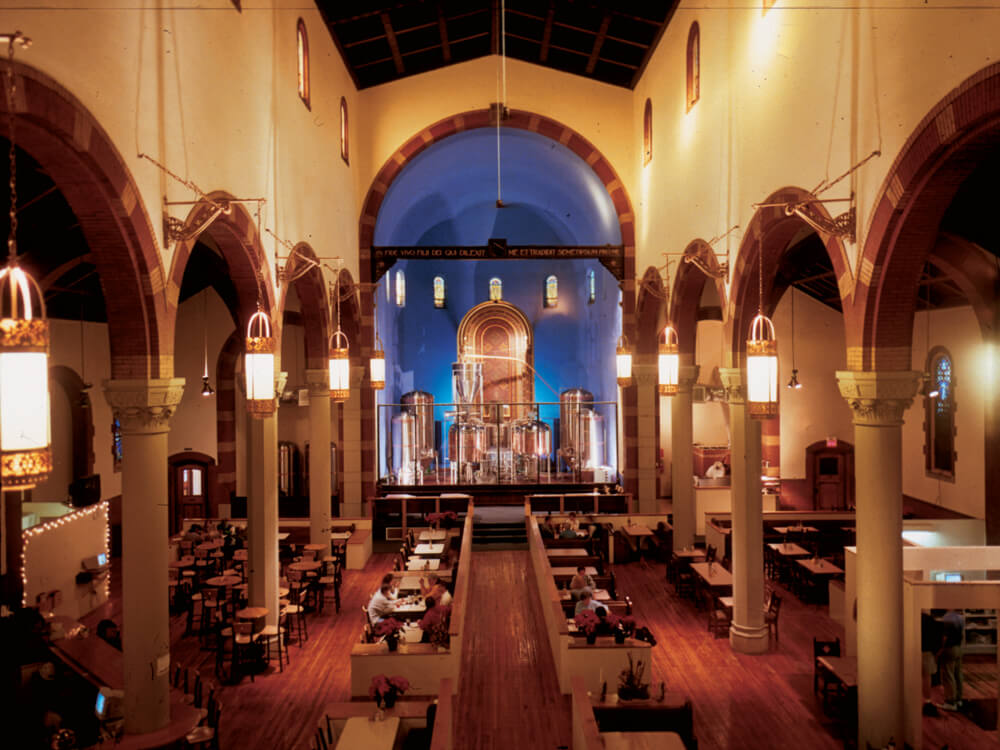 Explore & Photograph The Diverse Architecture In Each Neighbourhood

Pittsburgh has now shed the image of a soot covered city after its industrial past and is now becoming a leader in the green building movement. The is made up of numerous unique and walkable neighbourhoods brimming with must-see post-industrial warehouse spaces, historic landmarks, 19thcentury structures, art deco skyscrapers, and Victorian wooden houses.

The city is a melting pot of brilliantly beautiful architecture melding the old with the modern construction of today. Whether you’re a budding photographer or an Instagram snapper, the blend of styles offers unlimited opportunities to get that all important shot.

Tip: We adored walking the streets of Shadyside and admiring the movie-set perfect Victorian houses. We highly suggest visiting Roslyn Place. It may not look particularly noteworthy at first glance but it is home to the city’s last wooden street.

We also recommend adding an extra day to your trip to witness the genius of Frank Lloyd Wright. Only 60 miles from Pittsburgh, couples can hire a car for a day and drive to one of his most famous buildings – Falling Water. 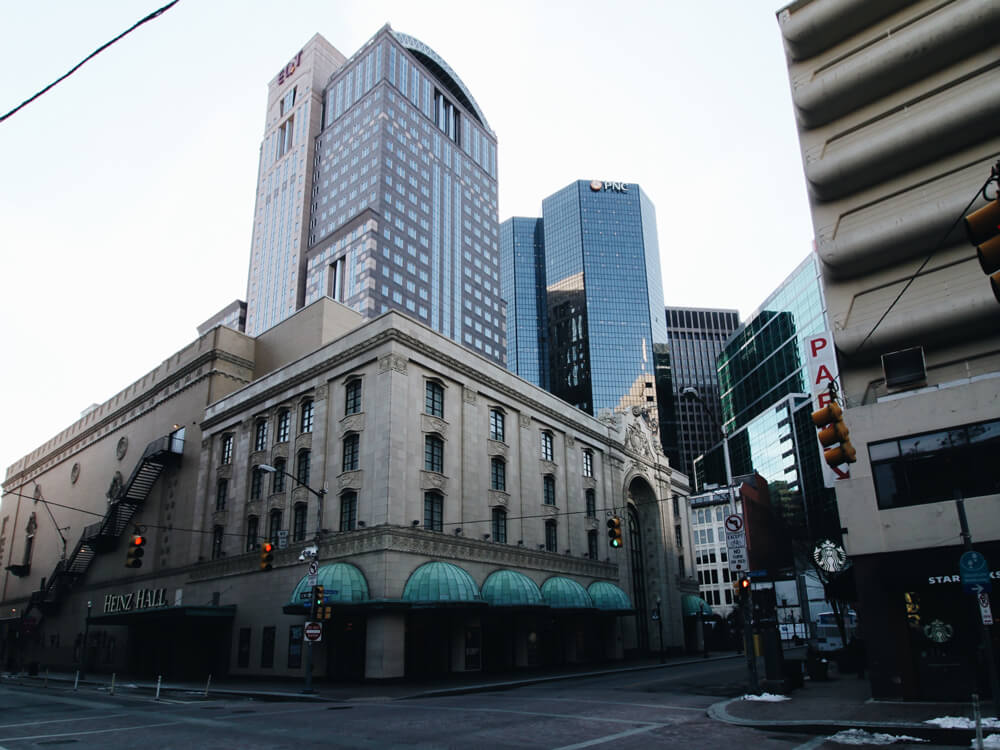 Art may not necessarily be the first thing that springs to mind when you think of Pittsburgh but the city has a number of fantastic museums and galleries that are well worth a visit. From flower art at Phipps Conservatory and Botanical Gardensto the largest collection of Warhol art in the world at the Andy Warhol Museum, Pittsburgh is certain to have a museum for you.

But if the more touristy museums don’t float your boat then we have just the thing. Something a little more alternative and quirky, the art houses on Troy Hill may be little out of the way but are sure worth the visit!

The Art Houses are part of a series of privately owned installation art works rather than public works and so do need to be booked in advance. It is like walking into a dream world encased in a residential house – inspiring and thought provoking. La Hütte Royal by Thorsten Brinkmann and Kunzhaus by Robert Kusmirowski are completed and available to be seen by appointment only.

For more information or to book please visit www.troyhillarthouses.com/

Cross As Many Of The 446 Bridges As Possible

Known as the ‘City of Bridges’. Pittsburgh has more bridges than any other city in the world – even more than Venice if you can believe it. Although not all cross over water it’s still a rather impressive number. Originally built by European settlers in the 1700s to connect one and other across the forking rivers, the bridges have become an iconic symbol for the city.

Crossing all 446 bridges may be a crazy feat but you cannot visit the city without crossing at least a handful of these spectacular structures – in fact it would almost be impossible to not cross a bridge in Pittsburgh.

Crossing the Monongahela River, The Smithfield Street Bridge is the oldest steel span bridge in the country and represents the cities industrial and innovative past. The city bleeds black and gold (the colours of their champion sporting teams) and the famous trio of (almost) identical ‘Sister Bridges’ are painted in the vivid and emblematic shade of yellowy gold. Linking Downtown with North Shore’s PNC Park and Heinz Field, the ‘Sister Bridges’ are suspended across the Allegheny River and are easy to cross on foot or on bike.

Make sure you check out our Couples City Break Guide to Pittsburgh here.