Everywhere in Fes feels stirred through with romance of one flavour or another.

Maybe it’s the way the medina feels like a mystery, with the possibility of stupidly beautiful, fountain-strewn courtyards and verdant gardens behind every heavy, deep-set door you pass. Maybe it’s the way the roar of cars and crush of crowds in the Ville Nouvelle makes it feel like you’re the only still point in the world; turning even what is, essentially, date night at Moroccan Nando’s (the sticky clasp of hands over a half-chicken and Coke at Rotisserie Chicken Mac, Ave. Leila Meryem) into something a lot more romantic than the British equivalent.

Whatever the reason, almost everywhere that we find in Fes feels like a serious contender for a Top Five Most Romantic Spots Anywhere, let alone just the dense tangle of the medina. Seems like there’s no rooftop in Fes el Bali where you won’t find swifts soaring above you in the dusk, sunset burnishing the yellow stone walls of the town, and a view of the medina beneath you, spread out like a secret you’ve solved together. 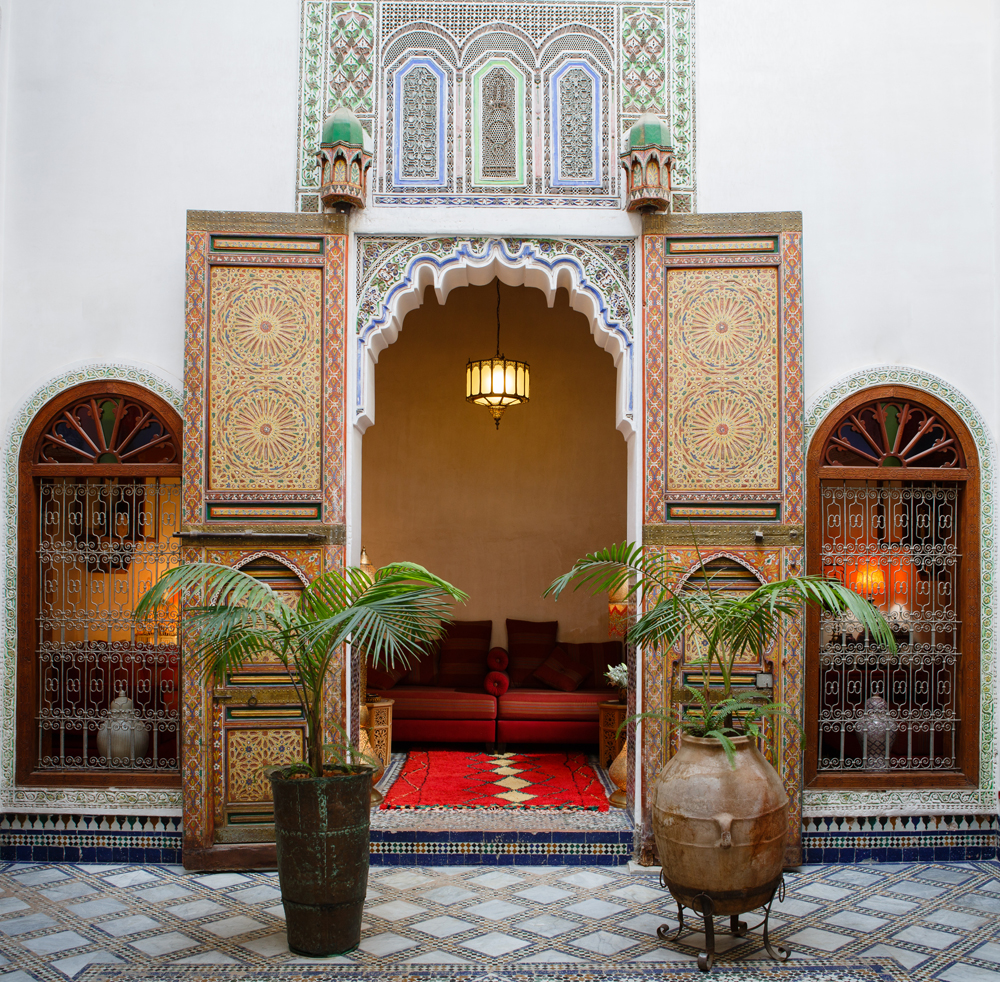 The streets of Fes el Bali are a maze, and most of these places are barely-signposted: enigmas wrapped in mysteries wrapped in high stone walls. But they’ll also send a guide if you call ahead, to collect you on foot from wherever you’re staying and let you trail behind them to your destination. Take our advice: nothing says romance like not spending eight hours lost in a labyrinth.

Ruined Garden is exactly what it says on the tin: a hidden pocket of greenery among the ruins, the courtyard of an ancient house crumbling around it. Eat Robert Johnstone’s modern interpretation of Moroccan street food – smoked aubergine relish with lemon jam, Ras el Hanout and espresso chocolate mousse – surrounded by trees, flowered trellises and lantern-light. On an April night Fes is just warm enough to want to be outside under the stars, and just cool enough to keep you sitting close together, arms over each other’s shoulders. For warmth. 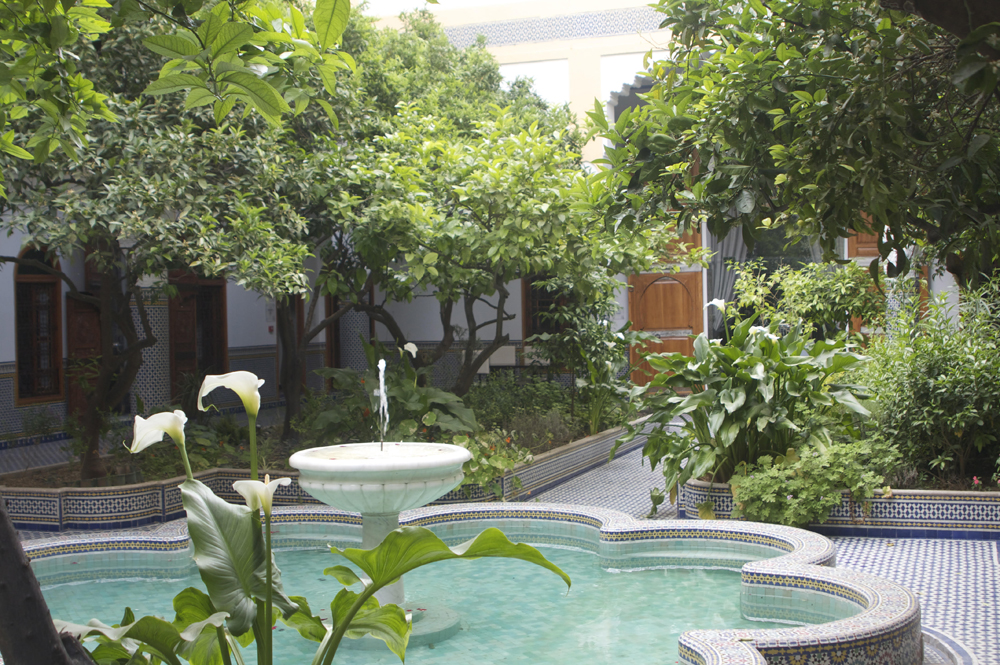 It’s hard to know where to embed at Palais Amani. There’s a compelling case for the courtyard being the most romantic corner of the riad: halcyon sounds from the fountain, tiled pillars, lanterns, and the smell of citrus and green shade of the lemon trees hanging over everything.

But there’s some powerful magic happening in the rooftop bar. Maybe it’s thanks to the panoramic views of the medina and the mountains beyond that, reminding you just how far away you are from your usual life. Twenty minutes after stepping out onto the roof my sidekick – not known for his ability to wind down on holiday – is asleep kitten-like in a cushioned alcove, non-fiction splayed open on his chest. I take pictures of him that I know I’ll never be allowed to share with anybody, get slowly hypnotised by the birds winging overhead, and eat all the olives. When he resurfaces we order more olives, peppered almonds, preserved lemon rinds and cold Casablanca beers. Two hours pass, maybe, since we stepped out onto the rooftop, but Palais Amani feels so separate from the world it could be eight. 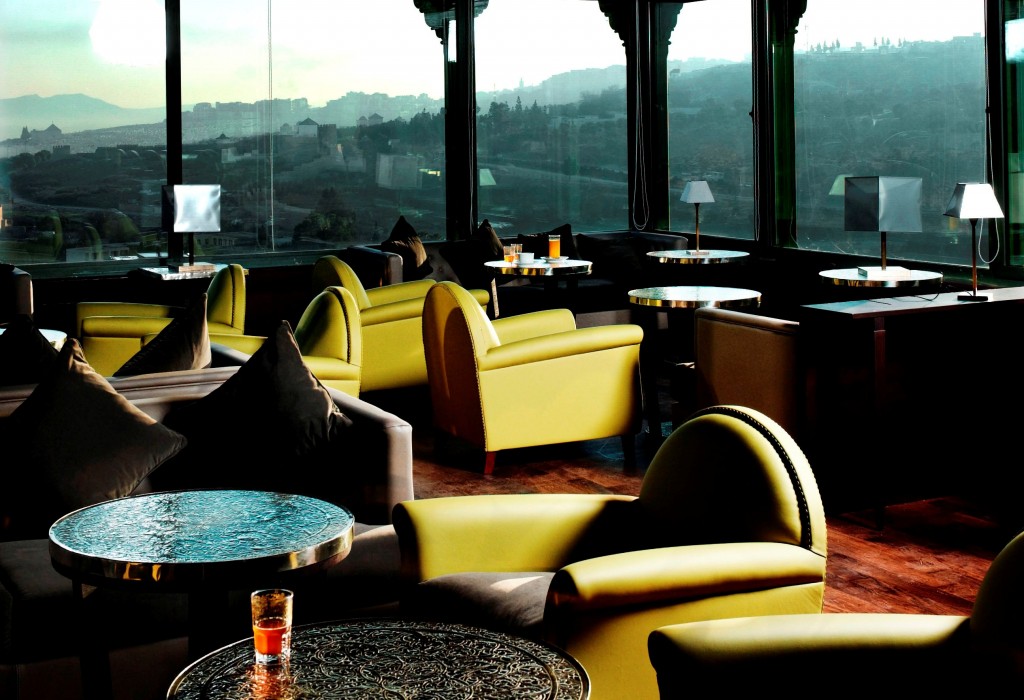 Golden Bar’s so flashy. The bar itself, gold and studded, an Art Deco monument to instagrammability.  And the clientele – although it’s open to non-guests, this is the first port of call for the wealthy, international guests of Palais Faraj, the hotel that Golden Bar nests above.

Two things keep it on the romantic side of pure flamboyance. There are the furnishings: tiny tables just big enough for two martini glasses and a bowl of almonds, that only work for two people who want to be very close to each other; deep leather seats for when you want to be very far away from everybody else. And secondly the views, with three of the walls massive windows onto the Moroccan night. Because however shiny the bar, it’s far out-lustred by the glow of lights from the medina below and the brilliant sweep of stars spread out above it. 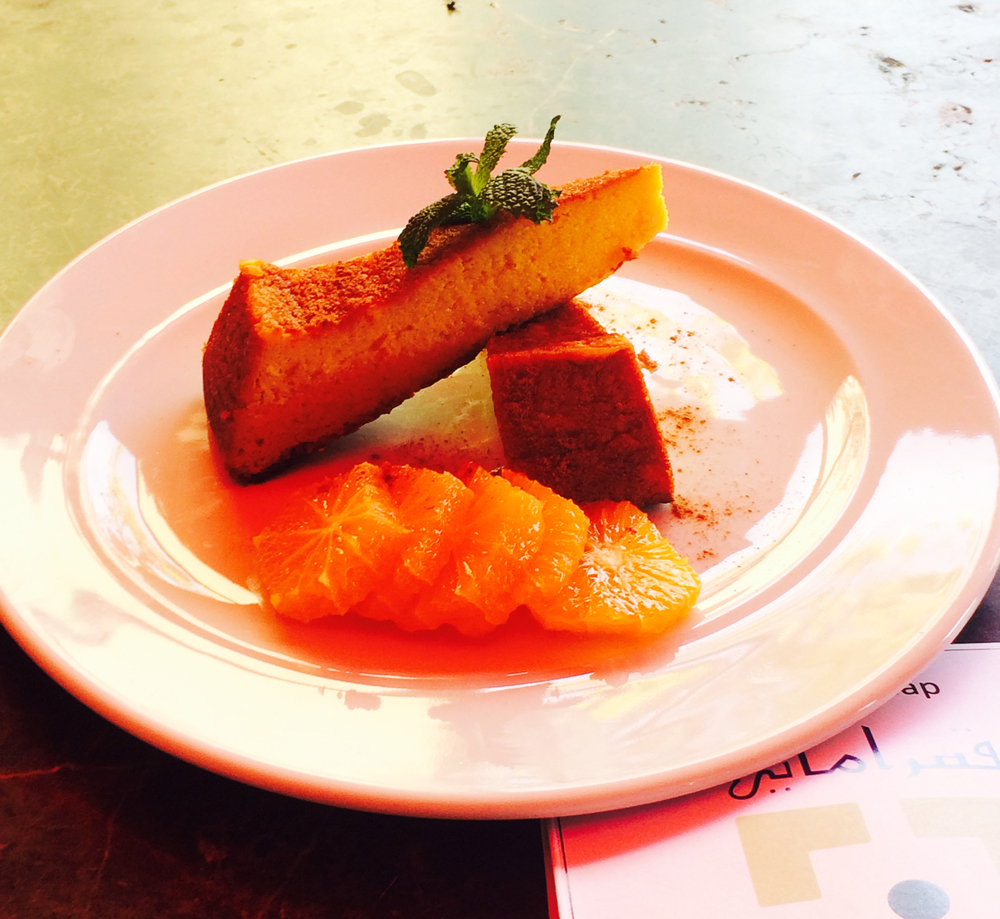 The romance of Café Clock is the polar opposite to Golden Bar’s high-shine opulence. This is the romance of a tiny, rickety projection screen showing old films in the bar downstairs, and pockets of sun-faded cushions and Ottoman seating scattered all over the different levels of the roof terrace.

Climb high enough and you’ll have a corner to yourselves. And either the waiters have a second sense about these things or my come-hither-and-let-me-order-cake eyes are really working – because no matter how secluded the spot you find, their homemade Sephardic orange and almond slices still arrive exactly when they’re needed most. Which is always. 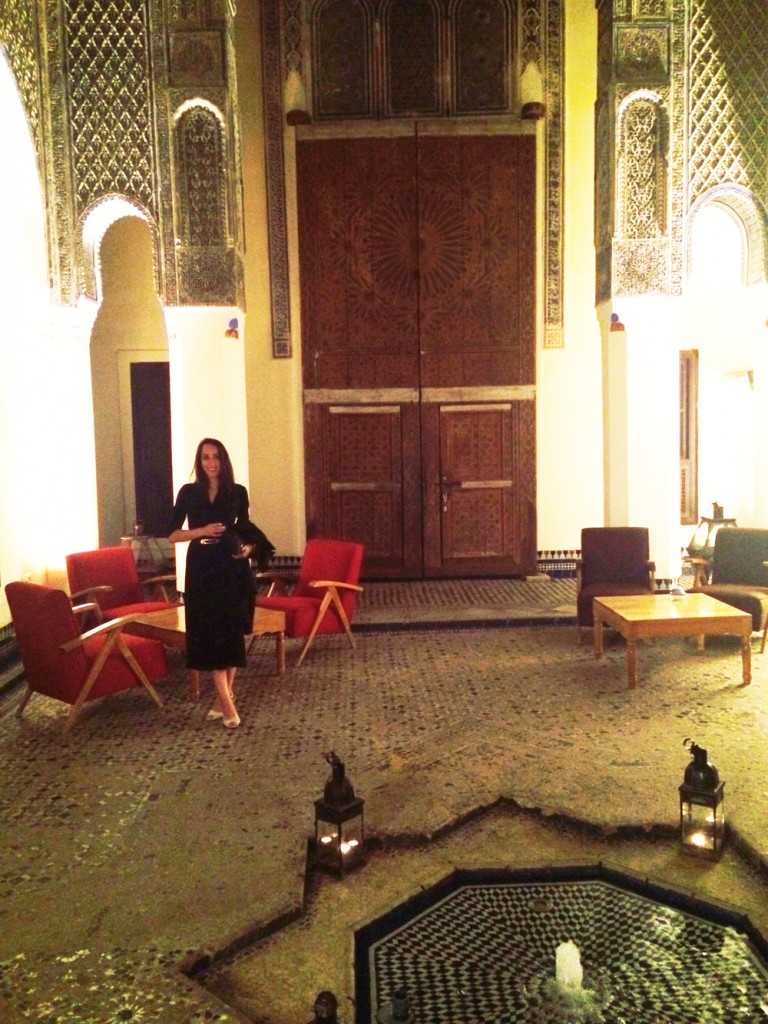 We spend four days in Fes and we find ourselves at Dar Bensouda twice. If it hadn’t been halfway through our stay when we discovered it, I like to think we’d have racked up six or seven visits.

Our first visit’s in the evening – and Dar Bensouda by candlelight is a ridiculously beautiful thing, our dinner taking place in a flickering hall, surrounded by cedar wood, the smell of cinnamon and harira soup and the soft crunch of pastilla.

Our second visit’s by day and no less beautiful, taking us to a different part of the riad. We drink cold juice in a mosaic-tiled courtyard, beside a tiny pool fringed with palm trees. This is the sort of place that – with some alchemy of high walls and quiet beauty and total lack of anybody else around to sicken with your triteness – makes the things that couples say to each other all the time, sound like brand-new poetry when you say them to each other.

Dar Bensouda: obviously an incredible place to go with somebody you love. And probably a slight risk of falling in love with each other if you’re not already.